The thing to keep in mind with 1977’s Star Wars—despite the opening crawl mention of an episode number–is that it’s totally self-contained. George Lucas had no eye for future franchise building, and left no real openness in his narrative. The bad guy, Darth Vader, gets away, sure, but the story feels complete. If the film had bombed, it would have at least stood on its own. That Star Wars went on to be a huge success only gave Lucas license to flesh out his universe as he saw fit. He’d spend the next 30 years of his life tending to it, for better or worse, and deepening (or confusing) its complexity. Now, with Star Wars: The Force Awakens, the newest episode in the series, and the first without Lucas’ touch, we see the end result of this labour: no way can this thing be self-contained.

For J.J. Abrams, franchise manager extraordinaire, the monumental task of a new Star Wars becomes two-fold: provide a zippy, fun movie that works as a singular piece of pop perfection and leave enough narrative loose ends to allow for Episodes VIII and IX (and countless spin-offs, comics, books and other ephemera). With this episode, the first Star Wars movie in ten years, and the one with the most riding on it since the franchise’s inception (when it didn’t even know it was to become a “franchise”), Abrams has to get you to believe that he’s up to the task. And, after stepping out of the theatre last Friday–and again yesterday–I can affirm that he’s managed to convince me. The Force Awakens does what it’s supposed to do, which is, namely, to get you to buy back in on Star Wars. 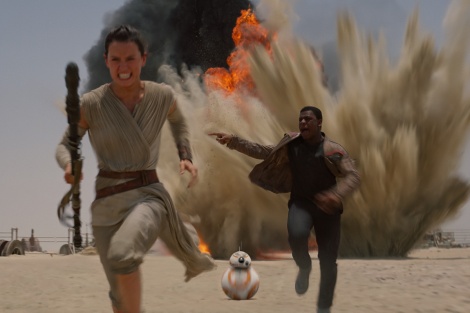 Two of our new favourite characters: Rey and Finn.

So, how does Abrams (and his co-writers Lawrence Kasdan and Michael Arndt) do this? First, like Lucas, he tosses you quickly into the new world of the post-Return of the Jedi universe with minimal explanation. We meet our trio of new characters in flashy, broad strokes: first Poe Dameron (Oscar Isaac), ace pilot, then Finn (John Boyega), troubled stormtrooper, and finally Rey (Daisy Ridley), dreaming scavenger. That last descriptor is important, as Rey becomes the audience’s stand-in for what’s about to take place. As with Star Wars, the story is one of collisions–Poe into Finn, then Finn into Rey–and destiny. But rather than be overwhelmed by the film’s speed and size, there’s a expressive excitement to each of these performances. We are ready and willing to tumble along with these characters as they go from the planet Jakku and out into space, while splitting up, reuniting and of course, meeting some familiar friends along the way.

It’s true, fresh off a few decades of not giving a shit, Harrison Ford is back as everyone’s favourite scruffy looking nerf herder, Han Solo. Fortunately for us, Ford does a solid job–along with Carrie Fisher as Leia, and others–of providing the emotional connection between the old trilogy and the new. There’s a complex poignancy to the meaningful looks between the lined faces of Ford and Fisher, the years adding weight to their exchanges. Or, more simply, it’s hard not to crack a smile after one (or more) one-liners between Han and Chewy. Like seeing Sylvester Stallone in Creed, it’s a treat to see these particular actors back in these iconic roles, even if they can’t move as fast as they once did. Still, The Force Awakens is at its best when it gives the new guys room to manoeuvre. And nowhere is this clearer than in the reckless newness of Adam Driver‘s Kylo Ren.

As has been true since the beginning, Star Wars really is only as good as its villains. Darth Vader is unimpeachable, Maul has his moments, and the rest are sadly forgotten. (The Emperor holds a weird middle ground, sometimes effective, other times silly.) Kylo Ren, with his wannabe Vader helmet and petulant anger issues, outdoes them all, save ol’Darth. Driver’s tortured performance is the primary reason for this. Not only does his presence give the evil of the film a more meaningful face–beyond General Nux (Domhnall Gleeson) and the First Order’s pseudo-Nazi band, and yet another mysterious holographic presence in Supreme Leader Snoke (voiced by Andy Serkis)–it gives the film some much needed uncertainty. This should not be a surprise; Driver has been stealing various shows with his off-kilter presence and strange cadence since he burst onto the scene (as if from a different planet) on HBO’s Girls. It’s the kind of weirdness the Star Wars universe, for all its visual splendour, has never quite traded in. 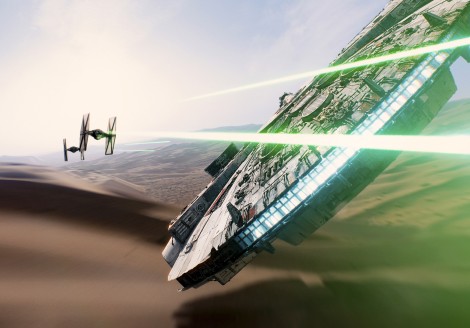 Truly a blast from the past.

There is a creeping sense of familiarity in The Force Awakens, which remains its unfortunate soft spot. If I was a fresh-faced eight year old, I wouldn’t have this complaint, but here we are, so I do. For all its appearances of bold new ideas, the film is remarkably beholden to the principles of the old. Everything from the settings (desert, snow, forest) to the callbacks both big and small, seem specifically derived from Star Wars particularly, or other beats from the old trilogy. If you’re able to push this from your mind (as the eight year old would), then it’s no problem. But, if you’re like me, you’ll have a hard time forgetting hey, didn’t Star Wars start with a cute little droid carrying secret plans? And didn’t it also involve a planet crushing force? And, didn’t it also… well, OK, I won’t harp on it, but you get the point.

There’s a moment early in the film when Rey and Finn are gearing up for an energetic action sequence and are both telling themselves aloud, I can do this, I can do this. You laugh because of where they are in that moment and what they’re about to do. But it’s hard not to hear Abrams, with his decision-making and storytelling hewing close to the beats of the original, saying the same thing. That Abrams generally succeeds points to the eventual confidence he (like his characters) finds. The Force Awakens, like the original Star Wars, is an extremely entertaining movie. But, for a film tasked with re-opening the potential of a once venerable franchise, I suppose the best thing to really say about it is this: We’re wide awake to the possibility of more.