The first round of the NFL playoffs saw blowouts, last-second finishes, and plenty of talking points to last another week until the second round begins on Saturday afternoon.

Aside from the incredible drama that two of the games provided, and the underwhelming anti-drama of two others, notice that all four road teams won this weekend. That is the first time in NFL history that had happened. I’m here to talk you through what happened, and predict what to expect for the divisional round this weekend.

Travis Kelce celebrates against the Texans earlier this season

The smart money was on the Chiefs, entering the weekend on a 10-game winning streak. The Texans, meanwhile, had home field advantage by virtue of winning a pathetically weak AFC South division. The Texans’ quarterback, Brian Hoyer, was coming off two concussions this season, and seemed to have a little bit of trouble determining which team he was supposed to be aiming for. Hoyer threw four interceptions, and also lost a fumble, to have one of the worst playoff performances of any quarterback in recent memory.

On the other hand, the Chiefs played a nearly flawless game, with quarterback Alex Smith going 17-for-22 for 190 yards, adding one touchdown and one interception. From Knile Davis’ opening kickoff return touchdown, the visitors were in control from the jump, in a trend that would continue the rest of the weekend.

Up next for the Chiefs is another road matchup, this time against the New England Patriots on Saturday at 4:30 (all times Eastern).

OK, that may have been a head shot.

Sometimes, penalties tell the story. The ones called, and the ones not called. This game will be remembered for the penalties called and not called more than for any of the performances. Early in the fourth quarter, Steelers linebacker Ryan Shazier launched a head-to-head tackle against Bengals running back Giovani Bernard. Bernard, temporarily unconscious, fumbled the ball and the Steelers picked it up. While Bengals players, coaches and fans called for a penalty to Shazier, the referee crew decided the hit was clean and that the Steelers would get possession.

This non-call fired up the Bengals, and the momentum of the game shifted considerably. The Bengals, down 15-0 as the fourth quarter began, tore off 16 straight points to take a late lead. With 1:30 left in the game, Bengals running back Jeremy Hill just needed to run down the clock. Instead, he was stripped and lost the ball, allowing the Steelers to retrieve the ball and have one last chance.

Of course, they were almost 90 yards away from the end zone, and about 60 yards away from a reasonable field goal length. That’s when penalties took over the discourse again. First, Bengals linebacker Vontaze Burfict lowered his shoulder into Antonio Brown’s head, resulting in a 15-yard personal foul. As Brown lay prone on the field, the Steelers bench erupted, and coach Joey Porter trolled safety Adam “Pacman” Jones into pushing him and making contact with a referee. That added another 15 yards to the penalty, and put the Steelers in field goal range. Steelers kicker Chris Boswell clinched the win with a 35-yard field goal, and the Steelers escaped Cincinnati with a controversial win. Jones spoke on this later.

This weekend, the Steelers travel to Denver to meet the Broncos on Sunday at 4:30. 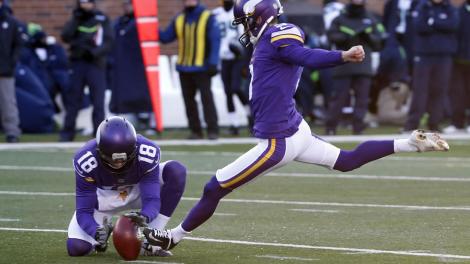 Laces or no laces, Walsh should nail that. But don’t just blame the kicker

This was billed as a defensive matchup, and that’s exactly what it was. The two teams combined to score one touchdown and four field goals. It could have been five, but Vikings kicker Blair Walsh missed a 30-yard field goal with less than 30 seconds left, that would have given the Vikings a 12-10 lead, and probably the win. The miss gave the ball back to the Seahawks, who knelt the clock to zero.

In the aftermath of that miss, Walsh was the subject of many Internet memes and jokes, as well as an equal backlash of sympathy. The fact is that Walsh was the Vikings’ best offensive player, the only player to register any points at all in fact, and while the miss was certainly egregious, the argument can be made that his teammates let him down. Had the Vikings managed even one touchdown, either through Teddy Bridgewater and the passing game, or perennial Pro-Bowler Adrian Peterson, the Vikings would have won and there would have been no need for Walsh to hit or miss that kick with the game on the line.

Meanwhile, Seahawks quarterback Russell Wilson continues his #blessed career. On a play that probably swung the game’s momentum, Wilson received a high snap from his center, but chased the ball down, got up from his knees, and connected with receiver Tyler Lockett for a huge first down that kept a drive alive, a drive that ended in a touchdown for the Seahawks, the only touchdown scored by either team all game.

So the Seahawks’ magic run continues, with a date against the first-seed Carolina Panthers up next. That game will be on Sunday afternoon at 1:00. 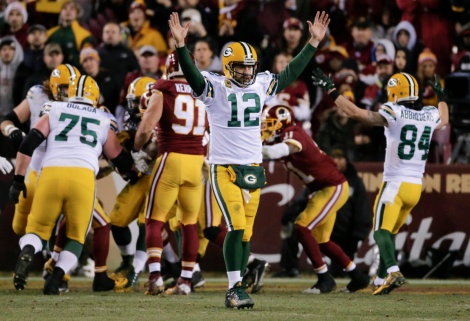 With the Packers’ victory over Washington, we witnessed an NFL-first; all four road teams won. Much like the Texans, no one was really surprised to see Washington lose at home. Washington, like the Texans in the AFC South, won a weak NFC East to earn home field advantage, but were clearly not the same caliber as their opponents. The Packers have not been as hot as the Chiefs have lately, but it was clear they were the more talented team.

Although that was not clear at all in the first quarter. With the Packers playing a slow, plodding offensive style, Washington’s average defense was more than able to keep up and stop them, recording a safety and three field goals to take an early 11-0 lead.

Once the Packers turned to a more aggressive, hurry-up style offense, the game shifted, Aaron Rodgers and his receivers looked more comfortable, and even regular season disappointment Eddie Lacy was able to be a factor with a rushing touchdown and 63 rushing yards.

The Packers now travel to Arizona to face a dangerous Cardinals team on Saturday night at 8:15.

Manning is back in control in Denver. Will it work out?

Having already named the veteran Peyton Manning as their starter this weekend, the Broncos are choosing experience (read: old age) over youthful exuberance in Brock Osweiler. Manning knows the offense, though, and despite a tired arm and zero mobility, should be able to carry a talented offense at home. The Steelers, meanwhile, have a week to rest Ben Roethlisberger, who injured his own throwing shoulder late against the Bengals. Coming off the emotional high of that game, and their late victory, the Steelers will likely be tired and bruised up, a recipe that does not mix well with the high altitude of Denver or the crushing Broncos defense. Look for the Broncos to take this one at home.

OK, the Packers beat Washington, but are they ready to spar with the likes of the Cardinals? Only three weeks ago, Arizona stomped the Packers 38-8, and that is not long enough ago to be irrelevant. Sure, the Packers may have found a groove with a quick offense against a weaker opponent, but the Cardinals have one of the best coverage corners in the league in Patrick Peterson, a merciless secondary, and a strong run defense. Meanwhile, Carson Palmer has the Cardinals offense soaring, and showing no signs of stopping. Arizona has had a week off to rest, and Green Bay’s players had to make a cross-country trip and play on a short week. The Packers are in a tough spot here. Again, I expect the home Cardinals to come away with the win here.

Cam Newton is not scared

The number-one seed of the regular season against possibly the scariest team to not have home field advantage. This will be a fantastic game, but Cam Newton is on an MVP tear right now, and Luke Kuechly is the leading candidate for defensive player of the year, and both of those guys play for the Panthers. Seattle has loads of talent and playoff experience, so I wouldn’t say I’d be shocked to see Seattle come away with a win, but my money is on the Panthers just getting by.

Last week, all four of the road teams won. This week, I’m predicting only one will, and that team is the Kansas City Chiefs. The Chiefs’ strength is their defense, specifically their pass rush. With numerous injuries to the offensive line, the Patriots’ weakness currently is their pass protection. (Also, they have virtually no wide receivers or running backs of note). I believe the Chiefs will harangue Tom Brady enough to make his life difficult, forcing him into poor throws and knocking him down plenty of times. I know Bill Belichick and the Patriots staff is smart enough to expect this, and can counter it with screen and draw plays, but will it work well enough, and consistently enough, to beat the Chiefs?

I’m not sure. The Chiefs are not a great offensive team, but they can probably score between 17-21 points, and that might just be enough to steal one on the road, and keep their streak alive. Remember while everyone is talking about the Panthers’ 15-1 season, the Chiefs are on the longest winning streak in the NFL, at eleven games. I believe they can make it twelve.