In 1991, A Tribe Called Quest released their classic hip-hop album The Low End Theory. Its opening track, “Excursions”, is powered by a throwback jazz bass line that ultimately colours the entire record. The line that’s always stood out to me, though, is early on when Q-Tip remembers a conversation with his father about how hip-hop reminds him of bebop, an older style of jazz. Without missing a beat, Q-Tip reminds his father, “well daddy, don’t you know that things go in cycles,” before the drum beat drops in and the song takes off. Forgive the stretch of a segue, but it also got me thinking about another looping self-aware 90s creation currently making a comeback: Deadpool.

Created by Rob Liefeld in 1991, Deadpool spun out of the darker pages of the X-Universe as a kind of perverse Spider-Man-esque assassin. Never one to shy away from consumate, uh, borrowing, Liefeld gave his creation a costume based loosely on Spidey’s own iconic look, and, with the help of writer Fabian Nicieza, cranked his sarcastic jibs and jabs up to 11. On top of that he added two of comic’s most popular elements at the time — a haphazard ability to dole out violence and the fearsome ability to heal (a la Wolverine, the character of the 90s). Deadpool became one of Marvel’s standout characters, popular in every X-book (X-Men, X-Force, etc.) he appeared in, and then, in 1997, given his own starring book. It was here where Deadpool came into his own as a bad-good guy (or good-bad guy?), breaking the fourth wall and existing on the wild fringes of the Marvel universe with style. In many ways the mirror of his visual creator — glib, cheesy in his humour and, yes, lovable (or laughable) in his childlike pizazz — Deadpool was a cultural hit. 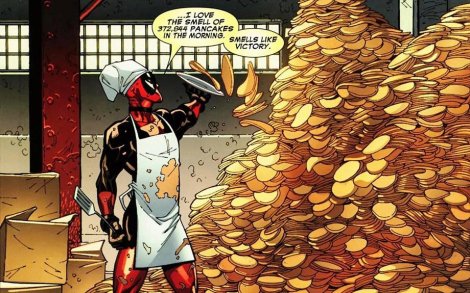 Which makes the journey it took to get the Deadpool movie made all the more perplexing. Deadpool’s first film appearance came in 2009 in X-Men Origins: Wolverine. As the title implies, 20th Century Fox foresaw a future with more X-Men spin-off origin properties blossoming from the tree of its most valuable character, Wolverine. The film was stocked with a who’s who of 90s characters — Wolvie’s main antagonist Sabretooth, the Cajun sweetheart Gambit, and Ryan Reynolds, a movie star in search of a hit, mutely playing Deadpool. Unfortunately, the film came out after audience fatigue with the X-franchise had reached its apex. The third X-Men film was a disaster, and on the comic business side of things, the Avengers had supplanted the X-verse as the most popular and profitable characters in the MU. X-Men Origins: Wolverine did not succeed. And while there would be another solo Wolverine film (2013’s The Wolverine, with its 80s throwback story), the damage to the brand had been done. It took another seven years to get this Deadpool film together.

At almost exactly the same time however, things were just getting underway at Marvel in a big way. Iron Man, released in 2008, proved to be a big success, the relaunched Incredible Hulk was generally better received than its artful predecessor, and plans to roll out Iron Man 2 and Thor were well underway. These new Marvel movies, launched by their in-house studio, were based around the new Ultimates series of comic books, which started in 2002. They were blockbuster-sized re-imaginings of the classic Avengers characters assembled in the modern day. More importantly, they skipped over all of the weird continuity, extreme attitude and bizarre stories of Marvel’s eventual darkest period: the 1990s, an era that saw the company gradually crumble into bankruptcy. And who was one of the biggest names in comics during that time? Why, Rob Liefeld! 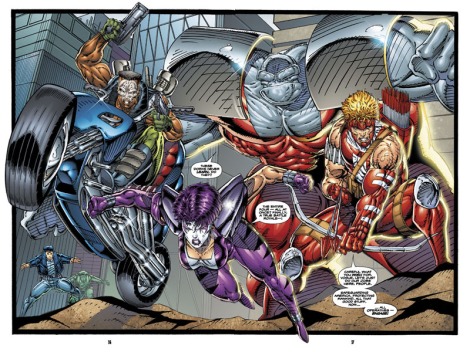 Here’s some Rob Liefeld art. Welcome to the 90s.

In 1992, after a gang of high-profile creators had had enough of working for the big two (Marvel and DC) comic companies, a new publisher emerged: Image Comics. Now, today Image represents a beautiful mix of content and form, with creator-owned series and graphic novels that cover almost every genre imaginable. But at the time, led by names like Todd McFarlane, Jim Lee and Liefeld, Image represented something else: a radical alternative. If you read comics in the 90s, there was no way to avoid the avalanche of Image characters — soaked in violence, sex and attitude — who represented everything Marvel and DC were not. Watch 1997’s Spawn if you don’t yet quite understand the “soul” of Image. This was the epitome of 90s comics, and it gradually filtered into every book from the era, with the X-Men getting darker and weirder, and DC trying to do all kinds of funky things with their iconic, if staid, characters. (Hello electric Superman!) As one of the biggest names out there, and a guy who’d worked for Marvel, DC and helped found Image, Liefeld was instrumental to asserting this whole aesthetic. That this style eventually burned itself out, making the 90s feel now like a woefully dated time, make Liefeld something of a Deadpool-like survivor. He’s still out there in 2016 firing away.

After its first weekend in theatres, Deadpool, with the titular character reprised by Reynolds (and his string of high-profile box office bombs), cleared $130 million. This is a lot of money. This is a lot of money for a film based on a popular (if now fringe) character. This is a crazy amount of money for an R-rated comic book movie coming out in February that wildly embraces the ironic, meta, blood-soaked pastiche of its 90s heyday. Deadpool isn’t looking to build some sort of huge Avengers-like movie universe. It just exists to laugh at the entire idea of comic book movies as a genre. It’s what the peak of Deadpool, the character, came to represent. He’s a comic book character and he knows it, gleefully taking jabs at the cliches and story structure that inform his medium. That audiences are responding to it tells you a bit about where we are on the comic book movie life cycle. Of course, since all of Deadpool‘s success is unprecedented, it means film studios will try to learn some lesson from its run and attempt to replicate it. Example A: Fox is already discussing their next Wolverine movie and, lo and behold, an R-rating is being mentioned. This may be the wrong lesson to learn. All we need now is a new “extreme” attitude and we’re all set.

After a solid decade of comic book movies that have gradually grown bigger and more stolid — think of the scope of Nolan’s Batman films, Marvel’s universe building, and DC’s epic-sized Superman treatment — Deadpool represents a turn back to that crazy 90s aesthetic. While it remains to be seen if this feeling will be more widely embraced by other studios, it at least appears to suggest either an exhaustion with the current comic book movie format or we’ve reached the “reboot the 90s” point of super hero era. There’s talk of an X-Force movie in the works, and Liefeld would love to see Cable, one of his other peak 90s creations (with pouches and badass attitude galore), brought to the screen. The next X-Men movie will be all about the Age of Apocalypse. Somehow, 20 years out, we’re back in the mid-90s. Don’t you know these things go in cycles?