After all the anxiety about #OscarsSoWhite and a run of, let’s say, uninspiring films down the stretch of 2015, it should come as no surprise that last night’s Oscar broadcast was a strange one. How does an organization acknowledge it is out of touch while in the process of celebrating its actual out-of-touchness? After watching the show, I’m not entirely sure the show’s producers, David Hill and Reginald Hudlin, and its director, Glenn Weiss, knew the answer. In truth, as society continues to muddle forward, how could anyone? 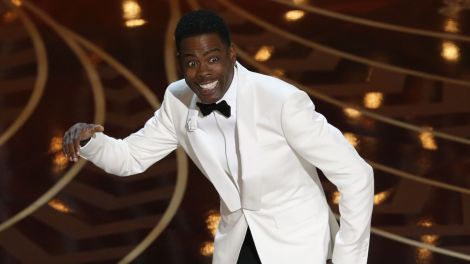 Chris Rock did what he does best.

If there is somebody to put out in front of the Academy’s gradual campaign to turnover membership and playfully nod to the lack of diversity among its ranks, one could do a lot worse than Chris Rock. His monologue, which opened with an accurate shot at the Oscars being the White People’s Choice Awards, did not pull any punches. Despite some stumbles from Rock in this opener, he did manage to put a solid label on the type of racism exhibited in Hollywood: “Sorority Racism,” or discrimination where everyone is nice, but the unfairness runs deep and unspoken. For his part, Rock tried to give voice to that oppositional anger. And, while he was let down by some jokes that, as per usual, probably seemed better on paper than in practice, Rock did his best to both play to and poke at the audience in attendance.

So much of the Oscars broadcast was divided along these lines and this kind of thinking — nice but angry, displaying diversity and tone deafness in equal measure. For every time the Academy tried to do the right thing, or show some step of progress, they were also ready to trip themselves up. Rock’s monologue set the organization to task, but then out trotted Stacey Dash — she of interesting thoughts on Black History Month — as the butt of a deeply confused joke I’m not sure she was in on. Later, the Academy’s president, Cheryl Boone Isaacs, a black woman, gave a speech with a clear mandate to diversify the base. It was inspiring stuff, but then later still Sacha Baron Cohen, in full Ali G regalia, came out to make jokes about little yellow people and their tiny dongs. (He was talking about Minions, but still.)

There was a very funny montage of clips from Oscar nominated films that were edited to include black actors — Whoopi Goldberg on the sidelines of Joy, Leslie Jones as The Revenant’s bear and Tracy Morgan as an inspiring Danish Girl — but then a later segment where Rock interviewed black people outside a theatre in Compton. Was this segment supposed to highlight their lack of knowledge about the Academy Awards or point at how different perspectives can be on the films in question? It was unclear. Those interviewed had all seen Straight Outta Compton, the N.W.A. as Superhero movie that managed to pull in one nomination, but were bewildered by the existence of something like Bridge of Spies. Rock grinned through the entire segment, having fun with the confusion, but I couldn’t tell what we were supposed to be laughing at. 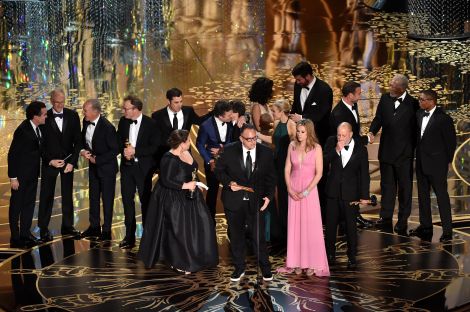 The Spotlight people take the stage.

Lost in all of this are the awards themselves. What a weird year for film. The presumed frontrunners for some of the major awards were under question right up until the moment the envelope was opened. Somehow Alejandro Gonzalez Inarritu is now a back-to-back Best Director winner. But his film, which was outshone in all the technical categories by Mad Max: Fury Road and its stream of wild Australian winners, was ultimately bested by a message movie that actually had a message. Yes, Spotlight, which became the first movie since 1952’s The Greatest Show On Earth to win Best Picture despite winning only one other Oscar (for Best Original Screenplay), won the day. It’s the movie about powerful organizations run by clueless white people. Who says the Academy isn’t self-aware? Well, ahem, self-aware to a point. After a stirring performance by Lady Gaga of “Til it Happens to You”, from The Hunting Ground a film about sexual assault on college campuses, which ended with the powerful visual of rows of women clasping hands (and was introduced by Vice President Joe Biden!), the Oscar went to… Sam Smith’s boring Bond song. (In his speech, Smith was excited to announce he was the first openly gay Oscar winner, which surely had Dustin Lance Black scratching his head.) It was a surreal sequence of events, one, it should be mentioned, that was not watched by Anohni, who skipped the show.

The only legit surprises came from equally unlikely sources. First came Ex Machina‘s out-of-left-field win in the Best Visual Effects category. The smallest film in the group somehow beat the combined might of The Martian, The Revenant, Mad Max and some film called Star Wars. But that was relatively small potatoes compared with the veteran stage and TV actor Mark Rylance claiming the Best Supporting Actor award from Hollywood icon (which is its own thing) Sylvester Stallone in Creed. It’s hard to get angry about the winner since Rylance was awesome in Bridge of Spies, and maybe the Academy wanted to shy away from awarding the lone white man in a thoroughly black film, but it was a bummer to not see Stallone ride out on top. The rest of the “big acting” awards played out according to the script, peaking with Leonardo DiCaprio finally winning Best Actor and giving the self-satisfied speech we always knew he was capable of. Good for him, I guess. 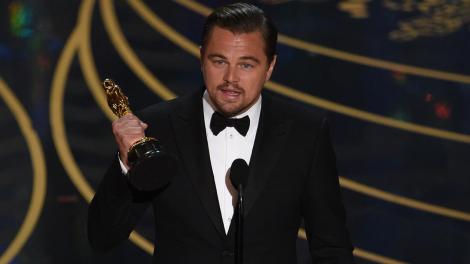 Everything is finally going great for Leo.

I suppose we can chalk the entire Oscars experience up to growing pains. The Academy still has a largely white and male membership, and while the pressure to change is building, it still is what it is. Inarritu now has more Best Director Oscars than every woman on planet earth. There was not one but two Suge Knight visual gags — I have no idea who these were for in 2016. Angela Bassett, Lou Gossett Jr. got in on the broadcast (never mind actual films), but Spike Lee got a mere line or two from the recapped Governor’s Awards. And Rock shouted out “Black Lives Matter” as the credits were preparing to roll. It was a small gesture, coming after he’d made a joke about the BET Awards, but again, it was another nod given in the direction of the voiceless. Then the broadcast ended to Public Enemy’s “Fight the Power.” Like I said, it was a deeply strange night.