Once in awhile, you’ll hear one of those what if Hollywood stories about a film’s origin. Die Hard was actually supposed to be a vehicle for Frank Sinatra, say, or producer Jon Peters had a hard-on for a giant mechanical spider which, once denied him in his proposed Superman movie, got plopped into Wild Wild West. These are tales you can chuckle about afterwards when considering how things eventually work out well, as in the former case, or poorly, as with… well, you know. In any case, the dudes who made the new film 10 Cloverfield Lane, from the producers on down, are movie nerds. I’m willing to bet they know those stories, or other more salacious ones. They aren’t consciously thinking about those tidbits now perhaps, but the construct of their latest movie — a puzzle box set almost entirely in the tight confines of a fallout shelter — evokes it just the same. How is that possible, you ask? First, let’s start here: who are they, anyway? 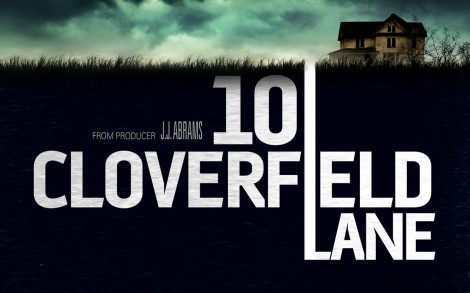 The name that draws the most attention is J.J. Abrams, ubiquitous producer and director of the biggest domestic box office success in movie history. He’s a big deal. In his orbit are old pals Matt Reeves and Drew Goddard (Felicity and Alias bonds are for life), here as executive producers, who both got their movie starts alongside Abrams. He was the producer at the helm of their big time feature Cloverfield, written by Goddard and directed by Reeves. Maybe now you’re starting to see where I’m going with this. Like Cloverfield, 10 Cloverfield Lane popped up with minimal advance warning and provided an extremely restricted sense of what it was about. The trailer featured more John Goodman than city-wrecking monsters, so it felt odd to see that weird word connect them. So much so that, hmm, maybe they’re not?

10 Cloverfield Lane, as directed by first-timer Dan Trachtenberg, begins on Mary Elizabeth Winstead‘s Michelle as she leaves behind her engagement ring and house keys to take to the open road. The film does not take many steps to solidify the whys and wherefores of this situation, though we get the feeling Michelle has either done this before or has good cause to do it now. At this point, the film could be anything, but then her car is smashed off the road and Michelle wakes up in a leg brace, chained to a pipe in a dingy concrete block room. It escalates quickly from there — wait, slow down, not to Cloverfield-esque levels, just to bunker size. As it happens, Michelle has been snared by Goodman‘s Howard, who, despite the terror of the setting and his overt menace, keeps insisting that he has actually saved her life — something about nuclear fallout or chemical attack, he’s not sure. The air above, we’re told, is not safe. It’s not until we’re introduced to a third and final denizen, John Gallagher Jr.‘s Emmett, that we come to understand the true contours of the film. This is to 10 Cloverfield Lane‘s credit, the space of it contracting and expanding to great effect, the simple set-up ready to thrill.

The story for 10 Cloverfield Lane was originally written by Josh Campbell and Matthew Stuecken, then Damien Chazelle got in on it (before going off to make Whiplash). It’s not hard to see the appeal of the film’s concept, construction and execution. We’re presented with a constricted set (think Panic Room or, say, Wait Until Dark) and a gradually restricting set of conditions. There are rules in place — things are locked, resources are limited, trust comes and goes, and of course, there’s only so much space. Goodman is perfect in this spot, as his impressive mass can make every room, nay, every shot suddenly feel much smaller. It’s unnerving to say the least. On the other side is Gallagher, who doesn’t get the best of many of the film’s interactions, but in support of the two leads, is presentable. To see Winstead here though is to again wonder where her career is going. She’s got a toughness and warmth to her that should translate more than it does. Are we sure there are no YA franchises out there for her to lead? When does she get on the Brie Larson career track? As the film devolves into a duel between her and Goodman, you’ll find yourself gripping your chair more often than not. You know what Goodman — with his booming voice and hulking presence — brings, with Winstead I suspect you’ll be surprised.

Fun times in a bunker with John Goodman.

To discuss any more of the specifics of the film would rob it of its power. Suffice to say, Trachtenberg does a wonderful job of controlling the tempo and framing both the tightness of the walls and the scale of Goodman’s mass. When the film switches to a handheld camera, we’re caught up in the tumble of it. The rolling out of information is done in just that right way to ramp up the suspense and terror of the later situations. We learn only the thinnest of backstories for these three characters, but that’s besides the point. This is a Twilight Zone episode or a low budget horror movie in a different time. We don’t quite know where it’s going throughout — though within these limits, it’s not super hard to have an idea — and that’s enough to see it through. In fact, so few films can legitimately develop this kind of sustained suspense, it’s enough to recommend 10 Cloverfield Lane on these merits alone.

In that sense, it’s unfortunate this film had to be labelled (branded? saddled?) with the Cloverfield moniker. The original concept, titled The Cellar, was greenlit, so it suggests that there was a desire, though perhaps not a burning one, to get this film done. On the flip side, you can almost hear some studio executive saying, “you know what’s even cooler…?” before pulling the trigger on injecting the Cloverfield idea. According to the internet, it was Abrams who came up with the title, which is cute but creates the oddest sensation of anticipation I’ve ever felt at a film. We know something weird is eventually going to happen, but what? And how far out of left field is it going to be? This is the unfortunate part: while you’re watching a tightly-wound, well-acted, and straight up thrilling film, you’re expecting something else. The conceit of 10 Cloverfield Lane, the central idea — trapped in a locked room with a scary man but in a larger world which may be equally or even more scary — is powerful. The film is still generally a success, but now it’s another one of those weird tales. It’s a shame it doesn’t quite get the chance to stand on its own.