Yes, they’ve done it. After all the interminable hours of filming, the painstaking special effects and post-production work, the waves of advertisements, the man-hours spent marketing and doing press junkets, the rolling thunder of pre-release hype and anticipation, it is here: A film that makes you feel immensely sorry for Ben Affleck. Or, as it’s more commonly known: Batman v Superman: Dawn of Justice. We made it. Now please allow me this paragraph of digression.

“I’ve made a huge mistake.”

Back in 2003, Affleck was quickly spending every bit of cultural capital he’d accrued over the past five or so years. Good Will Hunting had brought him a pile of celebrity attention and now, dammit, he was going to be a movie star. Except, of course, it didn’t work out that way. In one of the saddest stretches you’re likely to see in high stakes filmmaking, Affleck appeared in Paycheck, Gigli and Daredevil. It was not pretty. By the time 2004’s Surviving Christmas came out, Affleck’s movie star career looked dead. While there were a bunch of contributing factors to his career’s downturn (hello Bennifer), his stab at superhero immortality did not help the situation. Daredevil cleared $100 million but was largely savaged by critics and now appears as a time capsule (or cautionary tale) from a long forgotten era.

In the intervening time, Affleck would largely disappear from headlining films, making exactly one noteworthy performance over the next seven years (fittingly it was George Reeves, former Superman, in Hollywoodland), before his directing career took off and suddenly he was back on top of things again. Affleck won a Best Picture Oscar for Argo and proved he could direct (and star in) quality films. He could now afford to pick and choose the projects he wanted to develop and draw from a more talented pool of collaborators (goodbye Kevin Smith). It’s an enviable position in Hollywood. And yet, having learned apparently nothing, Affleck decided to tether (anchor?) himself to superheroes and comic books once again in these new boom years. Enter director Zack Snyder. Welcome Batman. And hello darkness, my old friend.

Dawn of Justice begins in a world where Superman (a returning, open-faced Henry Cavill) is seen as a threat to the entire world. The film opens with a replay of the climactic battle from Snyder’s previous Supes outing, Man of Steel, but this time from the perspective of an on-the-ground Bruce Wayne (poor Affleck). Thick with 9/11 imagery, we watch unholy destruction rained down on Metropolis as Superman and an unseen General Zod do battle, Wayne grits his teeth and the wheels are set in motion for a confrontation between two of the most enduring characters in popular culture. There’s precedence for this fight. In deranged master Frank Miller’s iconic The Dark Knight Returns, Superman is a lapdog for the US government, Batman the dangerous vigilante. Their showdown befits the latter’s slide into old aged bitterness, and the former’s twist into helpless Cold War-era servitude. It made sense at the time. Typical of Snyder however, is the loss of this or any other subtext to make things interesting. We are instead presented with a scary, mopey Superman and a dumb Batman, thrown into a plot that is somehow both stupidly basic and impossibly convoluted. The problem is one of motivation. 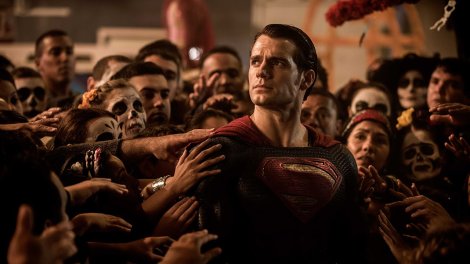 Say what you will about Man of Steel, its villain — a wildly game Michael Shannon — did not lack for a clearly defined purpose. General Zod’s gene-coded mission in life was to find a hospitable planet on which to recreate the lost world of Krypton. If it meant destroying an existing species, so be it. Zod’s “evil” plan was, to his mind, totally justifiable — if you assume he’s the hero of his story, and Superman the villain. It made for compelling drama (despite being buried under typically tedious Snyder-helmed action sequences).

In Dawn of Justice, we are introduced to DC Comics’ favourite mastermind Lex Luthor (Jesse Eisenberg), whose mission in life is far more hazy. Luthor, as per usual, has it in for Superman, though why this is the case is never quite clear (other than one being the good guy and the other the bad guy). So he spends most of the film looking for Kryptonite and manipulating people to do his bidding. Luthor also wants access to the alien leftovers of Zod and his ship for a nefarious purpose, and while a reason for this is stated, the result doesn’t really add up to anything meaningful. On top of all this, it doesn’t help that Eisenberg plays Lex as an ADD-addled, super dork with daddy issues. That cliched last item doesn’t even allow him to stand out here — all of the main characters have daddy issues. This is supposed to be Lex Luthor? The man who would be king of the world, if not for Superman? It’s hard to see it.

Ironically, this makes the central mystery of the plot — which involves international terrorism incidents, an angry legless former Wayne Enterprises employee (Scoot McNairy), and a cluelessly crusading US senator (Holly Hunter, cashing cheques) — all the more obscure, despite the outcome’s eventual obviousness. This is where we find Lois Lane (a returning Amy Adams, god bless her) on her ongoing quest for truth. Lois is now with Superman, and finds herself in all kinds of dangerous situations from which her boyfriend must endeavour to save her. Still, there are at least some emotional stakes to keep her involved; she worries about Superman. When Wonder Woman (Gal Gadot) shows up — which, admittedly, is about as fun as the movie gets — you’ll most be left wondering why she’s there at all. I mean, she’s there to help, but why? To what purpose other than because she is Wonder Woman?

Taking a step outside Dawn of Justice provides the easy answer: DC Comics desires to create a unified universe similar to what Marvel’s got going on. But, as I’ve written before, that took years of careful planning. What DC does here by dropping Easter eggs and random scenes of allusion (into an already bloated movie, mind you) is rather silly. Yes, we know now that Jason Momoa is going to be Aquaman, but, like, so what? Maybe more care should be given to the characters important to the movie we’re actually watching.

If you’re in a charitable mood, you can excuse Snyder for some of these curious creative decisions. Despite working from a script written by Academy Award winner Chris Terrio and the indestructible David S. Goyer, Snyder was given a mandate to introduce this, that and the other DC thing into this movie. Even a cinematic universe wasn’t built in a day, after all. What’s not as easy to forgive is his willful and deliberate misunderstanding of these characters. His Superman remains a moody, sad-faced man who looks like he derives exactly zero pleasure from, you know, actually being good. I don’t know how Snyder continues to miss that particular point, especially when two of the more powerful scenes in the film come from the strong visual of Superman saving innocent lives in peril. It’s right there, Zack! Fortunately his Batman does fare better, owing to the character’s relative comfort in a glowering mode of expression and dark world.

As for the rest of Snyder’s signature aesthetic — his general tone deafness, his super-saturation of colour, his operatic insistence on slow-motion everything — it’s all on display. While he does comically go to some lengths to assure us fewer people get accidentally killed in this film, we’re still left with scene after scene of buildings exploding and glass shattering and bullet shells bouncing off the ground (in slow-mo of course). We do eventually get the title fight as promised, but as you may have expected after the film’s roiling, disjointed runtime, it’s hard to care. Both Superman and Batman are so similar, so tired, so dour, it’s hard to do anything but laugh at the rain-soaked over-the-top seriousness of their massive climactic confrontation (which eventually spins into a different, even more loudly incoherent and tedious climax). At one point Batman hits Superman over the head with a sink and I was surprised it hadn’t come from a kitchen.

This brings us all back to Affleck, Batman and the real moment I knew this film had lost me. (OK, there were a lot of these moments, but this one stood out in retrospect and made me feel the most sad.) It involves a sequence with Batman in the Batmobile, surging around some abandoned warehouse/port area and generally running amok. Unlike in the Christopher Nolan-made Batman movies (which I will love and defend forever), there was no sense of mounting excitement here, no feeling of expertly executed action presented in a thrilling context. Instead, it begins with Batman shooting a tracker dart onto one of the trucks, and then later plowing his car through it. This is Snyder’s world’s greatest detective at work. (I won’t even get into the amount of dudes Batman mows down with automatic rifles in this film.)

Look, Affleck’s got a great chin to be Batman, and he holds the pose as best he can. It’s hard not to sympathize with his decision to dip his toe back into the superhero pool — there’s Downey Jr. money just sitting there! After a half decade plus in the wilderness, this role in Dawn of Justice promises him spots in a Batman reboot and Justice League (Parts 1 and 2!) films and potentially more DC spin-offs. This is guaranteed money, no matter how many insults are lobbed at Snyder, or how many times Affleck’s face is made into a meme. But it’s got to have a cost. At the end of Dawn of Justice, all I could think was: who wants to buy more of this?