Despite what the recent snowy and freezing hellscape in Toronto would suggest, we are now one weekend into the Spring-Summer film season. You can go ahead and blame my lack of grip on the calendar and the wanton passage of time for my total lack of a picks column to show for it. Today, one weekend late, the situation is rectified.

If you’re unfamiliar with it, What to Watch is the Same Page’s monthly film recommendations column where I help you decide which movies you should give your time to. For each week I provide a winner and a runner-up, with a brief write-up for each, to give you some idea of what each quality film is about and why you should maybe (or definitely) check it out. Sometimes I even take steps to advise you away from certain movies. This is important community service (and it’s also part of the fun).

As always, there’s one bonus limited screening pick at the end of the column that you should maybe also look into. So, we’re talking about nine to 11 films per column, typically. Seeing as how we’ve already missed one weekend, there’s some catchup work to be done here. Still, the best part of films is: they physically never go bad. Qualitatively? Well, that’s another story.

Now, on to What to Watch for April.

Tell me you’re not intrigued by all of this?

Oh, I’ve been humming along to the tune of Jeff Nichols for awhile now. Just FYI. So when I heard about a new film of his (one of two he’s got planned for the year) that was pitched as something between a road movie and a sci-fi thriller, I was, in a word: intrigued. Then I learned the film was going to have Michael Shannon (of course) along with Joel Edgerton, Adam Driver, Kirsten Dunst and Sam Shepard. My emotions jumped from intrigued to physically excited. This is the one to see.

Runner-Up: Eye in the Sky

Gavin Hood has had one of the more bizarre runs in recent filmmaking history. After bursting onto the scene with the Academy Award-winning Tsotsi in 2005, he spent the next ten years making bad movies (including a Wolverine one!). Now, somehow, he’s helmed a pointed film about the use of drones in modern warfare that features a delightfully international cast (Helen Mirren, Barkhad Abdi, Aaron Paul) and the final on-screen performance from Alan Rickman. Probably worth a look.

A reminder that Jesse Eisenberg is more interesting than Lex Luthor.

At TIFF last fall, I opted to watch Louder Than Bombs, despite having not seen any of acclaimed director Joachim Trier’s previous films. I was not disappointed in his English language debut. As I wrote then, Louder Than Bombs is a disarming and subtle film about a family dealing with grief. Fortunately, while the subject matter is heavy at times, the film isn’t buried in overly morose emotive drama. Instead, it is able to comfortably (maybe too comfortably?) glide along under the power of its solid acting and sturdy direction. It’s fitting then that Louder Than Bombs runs up against our next pick.

Demolition was supposed to be a big deal. It was the opening night film at TIFF last year and appeared to be almost genetically designed to be a big awards contender. It didn’t hurt that Canadian Jean-Marc Vallée (of Dallas Buyers Club and Wild fame) was the man behind the camera. Of course, it then got pushed past the fall and winter to its current release date. Now, the reviews have come in and Demolition is, well, getting destroyed. Still, Vallée can direct the hell out of a film, and I’m a sucker for Jake Gyllenhaal doing his thing. I’m going to try to give this one a chance.

Unfamiliar faces, but somehow familiar at the same time.

Winner: Everybody Wants Some!!

Where I begin with this one is those exclamation marks. Before you even understand what the film is about, who made it or who’s in it, you see that punctuation and smile. Only then do you embrace the idea of Richard Linklater, understated master filmmaker, having fun with the 80s, baseball and a bunch of fresh-faced dudes filling out his cast. Now the exclamation marks make sense — it wants you to get pumped up (!!). I suspect Everybody Wants Some!! will be fun and sweet, while also scratching that subtle itch that Linklater’s earlier, looser films (think obviously Dazed and Confused here) stand alone in reaching. And who knows, maybe this one will have the next Matthew McConaughey or Ben Affleck, am I right?

Thanks to the Helsinki International Film Festival (HIFF), I saw this film back in September. I feel quite comfortable in telling you: it is fucked up. But in a good way! Consider a situation where the rules of a film are established — a handful of punk millennials are trapped in a room with a bunch of neo-nazis outside — and then watch as the film follows its logic to the only real end point available. Director Jeremy Saulnier is now the master of a squeamish subset of films, the kind that make you question how far they’ll go. Green Room puts you into some extremely tight spots and just when you think, oh Saulnier won’t do that, he does that. And, oh yeah, Patrick “Captain Picard” Stewart plays the villain. 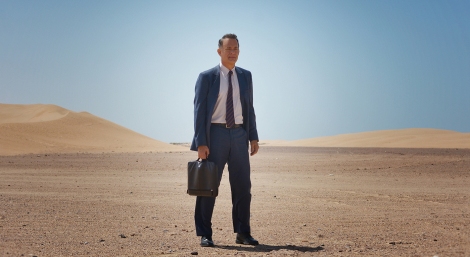 Tom Hanks has some questions.

Winner: A Hologram for the King

Tom Tykwer exists in a very weird realm in film. He’s made at least one movie you’ve heard of — maybe it’s Cloud Atlas (which he co-directed with the Wachowski sisters) or Run Lola Run (which is probably his best) — but he’s definitely not a household name. Here’s Tykwer adapting the titular novel from Dave Eggers (speaking of weird realms) and marshalling the star power of one Tom Hanks. I’m willing to bet A Hologram for the King will have some interesting ideas, and a fun visual flourish or two, and, also, that it won’t be particularly good. Tom Tykwer, everyone.

When you’re pitching a Twyker film as your winner, and this is on deck, things are looking grim. Let’s just get to the next weekend.

From the moment Keegan-Michael Key and Jordan Peele ended their modest hit of a TV show Key and Peele, it was clear they had bigger plans. Time has passed and now here we are with their leading men debut in a film that speaks directly to the type of subject matter the duo tackled on their show. Keanu involves a stolen kitty (which is funny in and of itself, I suppose) but really what it wants to poke at is these two guys, black men, who have to pretend to be drug dealers (a.k.a. actually much tougher and scarier than they are) to get the kitty back. It’s like John Wick (starring, hah, Keanu Reeves) but laced with a lot more performative toughness and jokes about what it means in 2016 to be black. 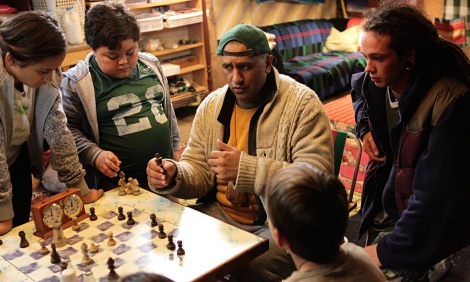 To quote the official IMDB description: “A brilliant but troubled New Zealand chess champion finds purpose by teaching underprivileged children about the rules of chess and life.” Sounds cliched? Maybe. But to me: this is catnip.