There’s a governing principle in screenwriting that says a scene should work to raise a question or answer one. The best scenes strive to do both. In this way, a movie pulls the viewer along, introducing new information to urge us from one moment to the next. Good films make us want to know more. There’s an implicit trust that forms here, a pact between audience and filmmaker; the film reassuring that if you give up your time, you will be rewarded with something. But when a movie tosses out more questions than it answers, when its mystery grows beyond proportion, the audience is asked something slightly different. Here, faith is required.

Midnight Special, from writer/director Jeff Nichols, begins on the move. It also feels out of time. The 70s muscle car the characters use contributes to this, surely. But, more broadly, there is something in the gritty look of the film, the bedraggled faces of most of the cast, that recalls a certain vintage. I feel like there are reasons — both in and out of the film — for this. In very quick strokes we meet Roy (Nichols’ long time collaborator Michael Shannon) and his friend Lucas (Joel Edgerton). They’re in a motel room with blacked out windows. A newscast tells us they’ve kidnapped a boy, which sounds scary until, lo, we meet him: goggled Alton Meyer (precocious newcomer Jaeden Leiberher). Don’t worry, there’s a quick answer to this specific question: he is Roy’s son.

More details are sprinkled in the wake of this trio’s passing — they escaped some sort of cult-like ranch (led by Sam Shepard‘s stern father figure) that has sent a pair of members in pursuit, there are federal agents after them, and, in a page right out of the Close Encounters of the Third Kind guide to filmmaking (aha, a 70s connection!), it becomes apparent that Alton has potentially dangerous supernatural powers of vague origin. Rather than bog down in more questions though (and there are some obvious whoppers to be asked right at the outset), Nichols opts instead to foster a sense of extreme urgency. Under a propulsive piano-led score, we wordlessly drive on with Roy, Lucas and Alton, hoping for the best. Even if “the best” remains terrifyingly opaque.

This is now Nichols’ second feature headlined by Shannon to have apocalyptic dreams. The first, Take Shelter, featured Shannon as a father convinced the end of days was on the way. That film gave him a chance to flex his considerable freak-out acting muscles while working with Nichols to build a sustained tone of paranoia and unease. It too required a leap of faith. In a similar way, Midnight Special asks us to trust it, even as the details of the film are slow to be sketched in and then left frustratingly out of reach. Consider, for example, the character of Lucas. Edgerton does mumbling low-key work in breathing life into the character, but all we learn of him is his connection to Roy and his skill set. We’re left with only a solitary notion as to why he does what he does. Same goes for Kirsten Dunst as Alton’s mother Sarah, whose character is even thinner. Her long braided ponytail is the most telling thing about her. With both characters, we have only to buy into their belief.

The men in pursuit, from the ranch and the government, have simple but clearly defined motivations. They see Alton as a saviour or a threat, respectively, in some sort of end times scenario. That’s really all we know. Even Adam Driver, as Paul the NSA man who acts as our questioning stand-in, struggles to make much of an impression. (And that takes some doing.) Too much feels left unsaid. Fortunately, while Nichols labours to keep his intentions out of sight, the action of the film credibly escalates to keep us engaged. One sequence in particular, built around a pit stop at a gas station, concludes with what I’ll call an emotional meteor shower. The framing and punch of it should be seen to be believed. It’s exciting not only for what it reveals about Alton in the film, but for what it suggests of Nichols outside of it. This is a first step for him into grander, more risky, territory. 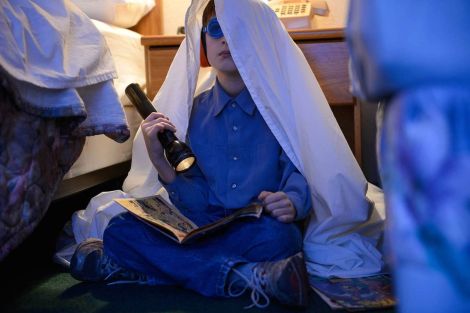 Alton is the key.

Past the tenets of screenwriting, there are basic notions of storytelling that drive to the heart of what we respond to as people. Fundamentally, most stories revolve around family — finding one, protecting one, returning to one. As mysterious as Midnight Special portends to be, it does effortlessly lean back on this simple idea to drum up an emotional response. It’s no surprise that this element of Nichols’ script, owing to its simplicity and clarity, works best. And while Shannon maybe isn’t the first actor you’d think of to project a loving, paternal quality, his small smile — doled out only a couple of times — conveys multitudes. We recognize the love this father has for his son, even as the film swirls away from us. What Midnight Special has to say about close encounters of first and third kinds, superpowers, scary government forces, and cults ultimately feels secondary. You will have questions at the end of this film, but also a bright shining answer to behold.