To say a criminal investigation sometimes goes after useless leads or trips into dead ends is to state the obvious. Sometimes cases fail altogether. The hope of course is that the detective or lawyer or crime lab tech can reverse course, retrace their steps, and continue down the correct path towards a just conclusion. To tune into the first couple of episodes of HBO’s The Night Of was to feel secure in the hands of a pair of veteran investigators, two guys who knew exactly how to get us from the inciting incident to the proper verdict. I wrote this in praise of The Night Of after those first two episodes. But now, six episodes later, I can’t help but wonder if we ended up stranded in a narrative cul-de-sac somewhere along the way.

Just as a heads up here: While I usually stay away from spoilers when discussing TV shows or movies, obviously I’m rolling right into spoiler country here to make my point. Only read beyond this point if you’ve seen all eight episodes of The Night Of.

Let’s work our way backwards here. First, the finale. It felt rushed, didn’t it? Despite being some 90 minutes in length, the various emotive steps The Night Of sought to hit in that final episode felt vaguely unearned, as if creators Richard Price and Steve Zaillian suddenly remembered a host of details and then had to race along to squeeze them all in. The images that worked — Naz’s father embracing him and putting on his coat through the view of a prison window; Freddy punching away on the heavy bag; John Stone’s final exit and the reappearance of the cat — hinted at a more streamlined show, one that was more confident in the idea of what it was about. Then again, I was the doofus who was praising The Night Of for its surplus of detail. There’s an explanation for my rushed change of heart, too.

As it turns out, the overriding criticism of The Night Of centres on its application of all those details. To me and others, it proved to be the show’s most insistently baffling and frustrating element. To run through episodes three to seven is to stumble down a surfeit of blind alleys that only occasionally pay off in meaningful ways in the overall narrative. For example, some had a problem with how much time the show spent on Stone’s foot ailments. This, I feel does amount to something, creating a late heartrending moment for Stone in the finale. As he stands up to make his impassioned closing arguments — perhaps the first and only time he’ll get a chance to do that in his life — the scenes of foot scratching, of Chinese dirt water treatments, of Fisher Stevens repartee, felt important. But why was it necessary to introduce John’s son, or have him show up on career day, or have him fall in and out of bed with a prostitute, or have him wantonly try to chase after suspect Duane Reade, or… well, you see my point. Yes, these are character beats, but they tended to distract rather than serve the overarching narrative. We’re left to wonder why the showrunners chose to focus on this rather than that.

The same can be said for elements of Salim and Safar’s journey as Naz’s parents, or whatever we’re supposed to make of Chandra the extremely capable and yet surprisingly dumb lawyer, or the view into Freddy’s scary prison world. This is narrative support work, provided to build up a structure that informs and shades the construction of the main story. It’s the kind of thing Price is truly awesome at in his sprawling crime novels. But here again, the side bits detract — or worse, insult. Still, these can be partially excused if the central storytelling is solid. Most watch The Night Of not to learn about the ins and outs of proper foot care, or how easy it is to acquire high quality veal while in jail, but to see how the detectives and lawyers will solve this case and answer the central question of the show’s mystery: Did Naz kill Andrea or not?

On that front, it makes sense for a show based on a mystery to use red herrings (extraneous and perhaps unnecessary detail) to keep us off balance. We have to wonder about Duane, or the angry mortician, or the vengeful stepfather Don Taylor. Then there’s that whole rigmarole with the inhaler, and hey, Naz was an angry kid, that could be something too. But there’s a trick to this kind of misdirection and ambiguity. Do it right and you have available details that merely need to be seen in a different light. Do it wrong, and you end up in an endless dog-chase-tail circumstance like that of The Killing, a show that introduced so many possible outcomes and twists that by the time it (rather hilariously) found the murderer, everyone in the Pacific Northwest had been indicted for something. Revealing, almost entirely out of nowhere, that the financial advisor played by goofy-ass Paul Costanzo is the killer, after having spent multiple episodes with Detective Box as he stared off into the middle distance, is hard to accept. The show does visually develop Box’s growing unease with the case, but the late-breaking happenstance of his discovery (which reveals all other details to be meaningless) had me face-palming in disappointment. As much as it pains me to say this: The Night Of is an example of doing it wrong. 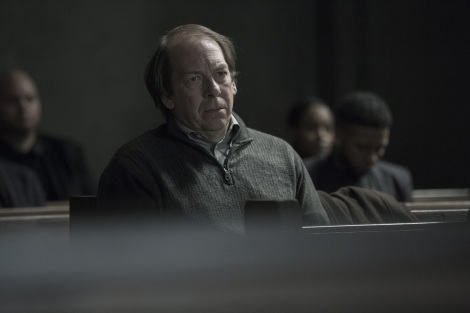 I have, uh, concerns about this case.

In any case, Stone gets his chance to shine, such as it is, in court; Chandra learns some hard lessons about the justice system; the Khan family have to go back to their lives in Queens, newly ostracized from their community; Box and prosecuting attorney Helen Weiss will carry on to nail the real killer; Freddy stays cool in his rage. What we’re left with is where we began — with Naz and Andrea and a beautiful view over the water. This is where the biggest “twists” of The Night Of actually reside. First, despite the show’s pedigree (read Price’s novels, people), the sad fact that Andrea remains a cipher, a prototypical wounded woman whose only function in life is to affect a man (and then die), is unfortunate. This is Detective Show Writing 101 and it is, quite frankly, tired.

Second, by episodes three and four, it becomes clear that The Night Of plans on documenting what could happen to a seemingly ordinary young man when introduced to the rough Riker’s prison system. I did not expect this development, but was ready to roll with it. Of course, I also did not expect Naz to become some sort of prison monster in a matter of weeks (months?) either. By the time he was getting a crown tattooed on his neck (before his big day in court!) and freebasing all over the place, my incredulity got the better of me. There were shades to Naz that solidified too quickly into black and white; maybe it would have happened that way, maybe not, but the show failed to convince me. I like Riz Ahmed the actor a lot (see Four Lions or Nightcrawler for more) but he was ultimately let down by the stolid, underwritten character he had to play.

Maybe it was a function of limited time, or maybe it was a surplus of ambition coupled with a lack of focus, but somehow The Night Of‘s investigation did get lost. It’ll never be as bad as the ridiculous sprawl of the aforementioned The Killing, and it’s far more naturalistic than, say, True Detective. (Seriously, Price can write circles around Nic Pizzolatto on his best day.) But in trying to build a convincing case, in marshalling a million different details and testimony to influence a final verdict, The Night Of ends up at an impasse. The elements that make the show interesting, also prove to be faulty. Like the jury in the finale, we’re left at an emotional deadlock. Ah well, on to the next one.