When I was four years old or so, my excitement about prehistoric dinosaurs was at its absolute peak. It was the only thing I wanted to talk about. To get me to chill, my kindergarten teacher devised a little hallway road show. As my memory allows, I was sent from class to class with a collection of my finest plastic dinosaur figurines, and a book or two, and permitted a few moments to present some interesting facts to the other kindergarten classrooms. Did anyone care about what I had to say? In retrospect, I’d guess probably not, but it gave me somewhere to direct my energy. (And it allowed my teacher some minutes of reprieve, I assume.)

In an extremely roundabout way, this is where I’ve come to with director Damien Chazelle and his new film La La Land. It too is filled to burst with passion, expressing as it does a love for things from a bygone era. It’s clear Chazelle cares a great deal about the subject matter and wants very much to tell you about it. Despite his earnest belief in the film, I’m not sure that’s enough of a reason to care.

These two stare, so you know they care.

In quick broad strokes, La La Land sets the scene. There’s Mia (Emma Stone), an actress-in-waiting, slinging coffee by day and being frustrated by life at night; her Hollywood dreams delayed while she auditions for roles that are clearly beneath her. She shares a sequence of meet-cutes — in traffic, at a club, at a pool party; all very L.A. — with Sebastian (Ryan Gosling), a struggling jazz pianist. He’s living in a rundown old apartment and wants only to open up his own club, a place that plays nothing but jazz. Over a season and a half (which somehow feels like a single afternoon), these two fall in love. I mean, more happens — Sebastian is recruited to be in a band, Mia puts together a one-woman show — but in any other context this would be a rote sequence of events, steps to hit on the rom-com dance chart, something we’ve seen many times before. Here though, as established in the horn-blast of an opening scene, when people start feeling the tug of emotion something different happens: they sing and dance.

This should not be a surprise to you. La La Land, having been much buzzed about for much of the year and touted as an Oscar favourite by half, a claim bolstered by its winning of the Audience Award at TIFF, has not been shy about its bold musical inclinations. Much like he did with 2014’s Whiplash (my favourite of that year, by the way), Chazelle foregrounds music as the film’s driving force. But where that movie moved with military precision, La La Land relishes its more dreamy, romantic qualities. And while your mileage may vary on those particular sentiments, there’s another difference here too, one that is harder to overlook. We’re left to ask about the stakes.

Like many films centred in and around Hollywood, La La Land is about making it as an actor, musician, or creative person. For as long as Hollywood has been known as home base for the entertainment industry, it has also be called a dream factory; and Mia and Sebastian are dyed-in-the-wool dreamers. By extension, Chazelle is one too. His Hollywood is a magical place where old theatres still show Rebel Without A Cause, studios still use hand-painted sets, and the general populace would be supportive of a jazz-only club (owned, operated and featuring some white dude). It’s apparent from note one Chazelle believes in this dream, and his direction is strong enough to almost sell it all. But it’s telling that the movie loses much of its song-and-dance numbers by the second half. Owing to convention, the drama is amped up by then, but the heartfelt emotion, so lightly sold in the film’s playful first half, doesn’t measure up. Mia and Sebastian are in love because we’re told they’re in love (though it’s a word we only hear during the obligatory break-up/reunion denouement), and what they stand to lose is… what? A dream of creative free enterprise? A sepia-toned future together? Somehow both the highs and lows of La La Land are not quite pronounced enough, even with all that soft-shoe. 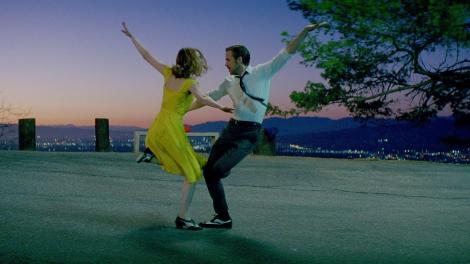 Stone and Gosling try their best with the dance moves.

I’m being overly harsh, I know. Chazelle really is a wondrous director, certain of his vision and camera. It’s not nothing to mount a musical in 2016 that isn’t based on some Broadway show from 50 years ago. It takes even more guts to cast Stone and Gosling, who (notwithstanding the latter’s dalliance in music and the Mickey Mouse club) aren’t going to make us forget Astaire and Rogers any time soon. The two actors have their qualities though, and each are given moments to rise to the occasion. Stone’s charms come when providing the film with some dramatic and emotive heft, while Gosling shines with comedy. (Just a hard cut to him holding a key-tar is enough to get a laugh.) And while their characters are arguably of the stock variety, the two leads do their best to imbue them with real life. The only other supporting actors of note are Rosemarie DeWitt as Sebastian’s sister Laura, given exactly one lively scene, and John Legend as bandleader Keith, who feels like he wandered in from a different film. Legend’s presence offers the film its most prickly bits of modern subject matter to tackle — as questions of authenticity and the dreaded selling out are bandied about. But unlike with Whiplash, where it was clear Chazelle was ready to bang various thematic drums until they broke, in La La Land he simply smiles and dances the camera away.

So La La Land becomes something of a middlebrow movie, which is an odd and unexpected place to find it given its aspirations. Chazelle has assembled this talent, and this classic look, and broadcast loudly his feelings and ideas — about the golden age of Hollywood, about musicals, about how passion on screen used to be. But save for a few spare magical moments here and there (including a powerful coda), his film does not actually say a whole lot. And notwithstanding the singing and dancing — which at least stokes fears of embarrassment — it risks even less. A worthwhile effort I suppose, but it’s no wonder these things, and the texture of this throwback era, went extinct.