Over the off-season I urged Blue Jays fans in general, to simmer down. The sky was not, and is not falling.

Yes, losing Edwin Encarnacion sucks. As season previews begin to trickle out, with speculation abound about if he’s the piece that can push Cleveland over the top in their hunt for a World Series, the finality of his departure has sunk in. It’s no longer an exercise in objectivity; it’s a crappy reality.

With that said, this Blue Jays team should be fine. They’re going to be a contending team, even if it’s for a Wild Card spot. There are questions still of course. Left field being handed to a Melvin Upton Jr and Ezequiel Carrera platoon seems like an obvious hole, as does the idea that Justin Smoak might be getting regular at-bats (though the presence of Steve Pearce should hopefully resolve that particular problem).

Beyond that though, this is a solid team from top to bottom. Obvious potential upgrades aside, the positional players are pretty much locked in. The starting rotation is a firm five deep as well. And the bullpen? There are still some clear questions, but the Jays front office took steps to solidify the back end recently, adding soft tossing left-hander J.P. Howell and former workhorse right-hander Joe Smith.

The two bring much-needed veteran depth to a bullpen that had potential, but was looking mighty thin. Both are coming off down seasons, which isn’t ideal, but both those down years are reasonably explainable (more on that later), and both have signed 1-year contracts; Howell for $3 million and Smith for the same, though with a $500K performance bonus clause. 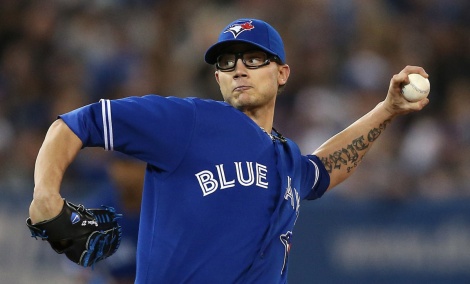 With Howell and Smith, it’s not really a question of fit. After losing mainstay Brett Cecil, the Jays needed veteran arms, and these are it, for now. Barring injury, they’ll likely be cogs in the Jays rotation for the entirety of 2017. Let’s get to know them a bit better.

(Unless otherwise stated, all statistics are per Fangraphs. Support Fangraphs)

Howell is a former first-round pick turned reliever. He made that transition back in 2008, as he became a key member of the Tampa Bay Rays team that made a run to the World Series. He was similarly effective for them again in 2009, posting huge strikeout numbers and appearing in 69 games. After missing 2010 with a torn labrum, Howell reinvented himself. He struggled upon his return in 2011, but pitched more to contact, trying to generate ground-balls rather than selling out for strikeouts. This began to bear fruit in 2012; in 2013 he became a member of the Los Angeles Dodgers, and the fruit ripened. Howell became a mainstay in the LA bullpen, posting sparkling ERA’s of 2.18, 2.39 and 1.43, with FIP numbers of 2.89, 3.30 and 3.34 to back those up.

So what happened last year? Howell never hit the disabled list, but seemed to lose some of his effectiveness. His 4.09 ERA was his worst over a full season since becoming a relief pitcher, as was his 74.6% strand rate. He’ll be 34 years old at the end of April, and there’s a reason he was available on the cheap.

However, there are reasons for optimism.

Despite the ERA number, Howell’s FIP (3.50) and xFIP (3.59) increased only very slightly as compared to his more effective seasons. His excellent groundball rate (59.1%) remained exactly in line with those years. His K/9 dipped very slightly to 7.82, but didn’t crater by any means. In other words, he was essentially the same pitcher as he was from 2013-15; so why was he less effective?

There are two semi-major flags I can see, and they’re intrinsically related. His home run rate increased to 11.8% in 2016. That’s still a pretty normal mark, but it was by far his highest mark as a member of the Dodgers. At first glance, he just appeared to be getting a bit unlucky: his BABIP in 2015 when he posted his 1.43 ERA was .333, and last year it was .338. The Dodgers were a solid defensive team, but if they don’t catch the ball, it’s hard to keep that ERA down, amirite J.P.?

The thing is, it’s harder to catch hard-hit balls. Howell has never been a hard thrower, but his fastball velocity averaged between 86.2 mph (2015) and 87.4 mph in his first three years with the Dodgers. Last year he was at just 85.3 mph. He also threw his fastball a much lower 51.8% of the time, and ratcheted up the usage of his curveball to 46.9%. That was a nearly 7% dip in fastball usage and a massive 12.4% curveball spike from 2015. All this led to him being dinged for an 18.8% line drive rate, again, the worst mark in his Dodgers career.

If you consider his splits, Howell isn’t a traditional lefty specialist. He’s more of a one-inning guy, who just happens to pitch from the left side. His career mark against left handed hitters is better, but he’s been very effective against righties as well. He somehow managed to put up a reverse split in 2016, as his effectiveness against lefties took a hit — however, 2016 appears to be an outlier year for Howell in many respects, so take that with a grain of salt.

Howell had a rocky April, but was his usual excellent self from May-July. He blew up again in August and as such, hardly pitched in September for the playoff-bound Dodgers. When I say he blew up, what that really means is that he had two extremely bad appearances — August 20th at Cincinnati and August 31st at Colorado; he gave up three earned runs and four hits in both games — which is hardly reason to throw dirt on the guy.

Howell’s effectiveness with the Dodgers coincided with his willingness to throw his fastball more often. When he struggled as a Rays reliever in 2011/12, he threw the fastball even less than last year. As the Jays did with Francisco Liriano upon his arrival from Pittsburgh, I’m hopeful Toronto can help Howell simplify his approach and get back to the fastball/curveball ratio that made him so effective from 2013-15.

With the 32 year old Smith, it’s a lot easier to pinpoint the source of his ‘struggles’: he was injured twice during 2016. I have struggles in quotation marks there because Smith was still decently effective in 2016, he just didn’t quite match-up to the sterling levels of his past performance. He had a very good 85.3% strand rate, and while his 50.3% groundball rate was a bit down for him (and is relatively low for a sinkerballer) it wasn’t far off his normal numbers. His 3.46 ERA split between the Angels and Cubs was fine, but the 4.99 FIP behind looks worrisome.

The biggest flag for Smith, much like Howell, had to do with giving up the long ball. After posting HR/FB rates somewhere between 2.2 and 8.5% from 2011-2015, Smith’s number came in at a bloated 19.5% in 2016. His strikeout numbers also dipped significantly, coming in at 6.92 per nine innings, his lowest mark since 2011. Smith’s velocity on all pitches was virtually identical in 2016 to his past couple seasons, so there’s no real reason to worry on that front. With him, it’s more to do with pitch usage.

Like Howell, Smith decreased his fastball usage in 2016. Unlike Howell, the fastball isn’t Smith’s primary pitch. His sinker (48.4%) and slider (34.3%) usage were still his primary offerings, but unlike in his days with Cleveland in 2012 and 2013, he threw a four seam fastball (14.4%) and a change-up (5.3%). The change-up is has returned to Smith’s repertoire in the past two years and indications are that it should likely be scrapped. It grades out with a significantly negative pitch value on Fangraphs, his only offering that does so.

When Smith was at his most effective, he was throwing sinkers and sliders nearly 100% of the time. In fact, in 2012/13 with Cleveland he didn’t throw a single four seam fastball or change-up, and posted two of the best seasons of his career.

The very best season came in 2014 with the Angels, and then he sprinkled in 13.8% four-seamers, so I can live with that, but Joe, baby! Lose the change-up, throw that dirty sinker and get back to being the wonderfully vexing side-armer we know you to be!

The Jays bullpen is going to be a work in progress in 2017. Howell and Smith may both work out, but both come with attached risks as well. Such is the game of relief roulette that teams play when they rely on free agency to stock the bullpen. However, the risk associated with both guys is well worth the minimal financial commitment.

To wit: in his very best and most dominant season in the Jays bullpen (2015) Brett Cecil was worth 1.4 WAR. He got a 4 year, 30.5 million dollar contract from the St Louis Cardinals, despite having a relatively bad year in 2016. In that same 2015 year, Joe Smith and J.P. Howell were worth a combined 1.2 WAR for their respective clubs — after down 2016’s, they got the aforementioned bargain one year deals from the Blue Jays. Baseball doesn’t always make sense.

So no, you can’t replace a guy like Cecil, not completely. But you can try to cobble him together. Howell and Smith give the Jays a pretty good chance at doing that.

One response to “The Blue Jays Bullpen Build 2017: J.P. and Joe Edition”