By: Dan Grant and Russell Peddle

Yesterday, Daniel Reynolds, John Gaudes and myself threw ourselves to the wolves, reviewing our pre-season predictions for the Western Conference.

You can check out that particular bloodbath here.

Today, Russell Peddle joins Dan as they go through their picks for the East, which actually worked out a hell of a lot better.

I’d like to remind everyone that these were meant to be our under the radar predictions — that’s why we got through the West yesterday without really mentioning the Warriors and why you’ll see a noticeable absence of Cavaliers talk today. You can find that stuff anywhere; you come here because you probably clicked on the wrong link, and we intend to reward that careless behaviour with some real out-of-the-box NBA predictions! 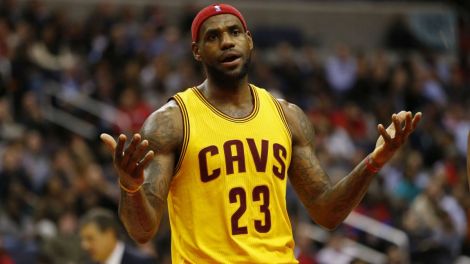 Sorry LeBron. Not really though.

Of which prediction are you most proud?

Russell: It’s hard not to be proud of almost all of them, really (with one exception, which we’ll get to in a moment).

I said the Indiana Pacers wouldn’t be a top team in the Eastern Conference like many people thought they would be, and I was mostly right there. They’re currently 25-22, the sixth seed in a weak conference, and have a negative average point differential (-1.11). No one has any reason to really worry about them come playoff time, considering that they’ve gone from being one of the league’s top defenses to a bottom-half team in defensive efficiency (16th in the Association with a defensive rating of 108.4), while staying in the bottom half in offensive efficiency as well (18th with an offensive rating of 107.2). All that, while having the easiest schedule in the NBA, according to Basketball-Reference.com.

Beyond that, I said Giannis Antetokounmpo was going to have an All-Star-calibre breakout (check), that the Celtics would be better than last year with the addition of Horford, but not true contenders (check), that Dwight Howard would have a bounce-back year (check), that Roy Hibbert was washed (check), that Kristaps Porzingis was now the best player in New York (check), that Joel Embiid would be Rookie of the Year (check), and that Willy Hernangomez would be tall this year for the Knicks (check).

Dan: It’s not common practice to compliment each other during these things, but well done Russell, super job!

Yup, it me! Right down to the haircut, visor and t-shirt.

Anyway, I did OK on my own predictions. I said the Hawks could go either way and they’ve actually been both good and bad. I said the Pistons would stink and miss the playoffs, and they stink but might sneak in as the eighth seed. I agreed Willy Hernangomez would be tall, though referring to him as the ‘Spanish Scalabrine’ might have been an insult, as he’s been very good lately.

My favourite prediction though, is one that took awhile to bear fruit, so now I’ll ask you to bear with me as I explain.

The Washington Wizards began to the season 2-8, and finished the seasons opening month with a 6-11 record. They looked like a mess under new head coach Scott Brooks, and there were real rumblings that the team might be considering trading either franchise cornerstone John Wall or oft-injured swingman Bradley Beal. The Wizards slowly righted the ship during December, going 10-5 in the month and playing generally better basketball. However, sitting a game under .500 as 2017 began, questions still lingered, and the Chocolate City faithful had to wonder which Wiz team would show up for the rest of the season.

They’ve responded by going 18-5 since the calendar turned, including winning 11 of their past 12 games. Otto Porter looks like he’s for real, and might be in line for a maximum contract in the off-season, Beal has been healthy and effective and Markieff Morris is playing out of his mind. The Wizards could still use some depth on the bench, but they’ve blossomed into the team many thought they always could be, given the immense talent in their starting five.

It’s all happened on the back of the man named John Wall. My prediction was that Wall would finally make the leap to All-NBA, with a chance at leading the Wizards past Toronto and Boston for the Eastern Conference’s second seed, finally parlaying his otherworldly talents into an overall otherworldly season. As of this writing he’s setting career highs in field goal percentage (45.2),  free throw percentage (81.2), points per game (22.2), assists per game (10.6). He leads the NBA with 2.1 steals per game, also a career best. His offensive box plus/minus is a career best +3.5 and he’s been a net positive on defense. Wall has finally become the player that we wanted him to be when he was drafted first overall in 2010, and the Wizards look like the most dangerous team in the Eastern Conference right now.

Which of Your Predictions Makes You Want to Crawl in a Hole and Die?

Dan: While I didn’t hit Russell’s Nostradamus-like highs, I didn’t hit his lows either. My worst prediction would have to be that the addition of Al Horford would turn the Boston Celtics into an elite defensive team. As of this writing they sit 18th in defensive rating, nestled in between the stinky Pacers and Mavericks, giving up 106.1 points per 100 possessions. With that said, they’ve dealt with injuries to premium defenders in Horford, Jae Crowder and especially Avery Bradley all season long, so their real composed defense might be a product we haven’t seen yet. However, they also have to perform the magic trick of hiding 5’9 Isiah Thomas on defense at all times, something that even Brad ‘Houdini’ Stevens struggles with.
So while I was pretty wrong, I’ll say this prediction makes me want to crawl into the hole and take a nap, not die, and the hole itself is in a pretty nice neighbourhood, no badgers or anything after me.
And now:

Russell: OK, here’s where there bragging must end. I figured the Detroit Pistons would be the fourth-best team in the Eastern Conference (implying that the Cleveland Cavaliers, Toronto Raptors, and Boston Celtics would be the only clearly better teams).
It was a trendy, hipster preseason pick to say that the Pistons would take a leap this year, and I guess I just wanted to be cool and fit in. I now regret it and give Dan props for saying they weren’t a playoff team.
The Pistons are currently  27-30, and per Basketball Reference, rank 22nd in offensive rating (106.4), 7th in defensive rating (106.9), and are 19th in the Association in average point differential (-1.30). I’d probably still take them over the Pacers, but the Atlanta Hawks, Washington Wizards, Charlotte Hornets, Milwaukee Bucks (before Jabari’s injury), and maybe even the Chicago Bulls have been better.
Dan: In fairness to you, they’ve been playing well lately and have crept up ahead of the Bucks and Hornets for the eighth seed, but will have to hold off both those teams and the hard-charging Heat, which isn’t something I’m convinced will happen. Even though they’re 6-4 over their last 10, that point differential is actually still heading in the wrong direction. The Pistons stink and need to make changes in the off-season.

What wild prediction do you have for the second ‘half’?

Russell: I’m going to double down on trying to predict the fourth-best team in the Eastern Conference, considering that it’s probably the most interesting seed left up for grabs. The Cavaliers are clearly first, and the Raptors and Celtics are destined to battle between second and third, but there’s still one other team that will have home-court advantage in the first-round of the playoffs.
I say that team will be the Charlotte Hornets.

Dan: I am going to save Russell here. He wrote this a couple weeks back, as we were hoping to run these pieces a bit earlier. Since he wrote this prediction, the Hornets have gone off the rails, losing 7 of 8 games, and sit 24-32, in 11th place in the Eastern Conference.
Here’s the rest of his of his original prediction:
Russell: They’re struggling right now, as losers of 11 of their last 15 and four in a row, but the numbers suggest that they’re better on the season as a whole than their 23-25 record would have you believe.
The Hornets rank in the top half of the league in both offensive rating (108.4, 14th) and defensive rating (106.8 defensive rating, seventh) right now, and the defensive efficiency, in particular, should get them back in the win column more regularly before long.
They have an average point differential of 1.60 to date, which just so happens to be the ninth-best mark in the league and the fourth-best in the conference. Their resulting Pythagorean win-loss record (expected wins based on average point differential) of 27-21 would make them the four seed in the East, if we determined such things by Pythagorean wins (one can dream).
Kemba Walker is having a season that might be worthy of All-NBA consideration (23.3 points, 4.2 rebounds, 5.5 assists, 1.2 steals, 45.7% shooting from the field, 40.5% from deep, and 82.7% from the line) and I just like the chances of him carrying his team from the eighth seed in the Eastern Conference to fourth by year’s end.
Here’s hoping they don’t go all Pistons on me.
Dan: It turns out they did Russell. It turns out they did. In fact, they wish they were the Pistons right now. There’s still time I guess, but they’re so desperate they traded for a Plumlee! I’m willing to call it right now.
Oh well, you can’t win ’em all.
For my own prediction, I’m going big and bold: the Toronto Raptors, now that they’ve acquired Serge Ibaka, will finish the season on exactly a 16-9 run, and finish with the 49-33 record I predicted before the season on the Raptors HQ roundtable. Toronto has been the anti-Wizards in 2017, struggling with injuries and inconsistent play. They’re 10-14 since 2017 began, but with this years lengthy All-Star Break (they don’t play again until Friday, February 24th) they should ideally have both Ibaka and Patrick Patterson in the lineup when things start again, giving them a fully healthy roster for the first time in a donkey’s age. They have some things to iron out, but they have enough time left in the season to do so, and head into the playoffs on a positive note. The optimist in me chooses to believe that they’ll figure it out.

What?! Don’t look at me like that, collective readers. I’m not a homer, no sir.
Thanks to Russell Peddle, John Gaudes and of course, our fearless leader Daniel Reynolds for subjecting themselves to this type of horrendous self-reflection. We’ll see you again around playoff time, when, as always, we’ll try to get on the same page.