So the ESPN layoffs made their way around the Internet late last week.  A lot of names and faces recognized by sports fans were let go today;  about 100 in total. Before we all start tweeting about how it’s a travesty and give our best “in memorium”, recall that Great-West Life laid off 1,500 Canadian employees two days before, and nobody gave a shit.  Honestly I’m not trying to make you feel guilty for not knowing about a round of layoffs in Canada, I’m just trying to say that laying off 100 people isn’t actually a big deal, and that the only thing that really makes it relevant is that we recognize like 5 of the names.

There’s many different angles from which to look at this event.  And an FAQ format is probably best served for this type of article.

How the Model Works

ESPN’s model has been quite lucrative since the invention of satellite and cable, but the bubble is slowly bursting.  Here are the Coles notes:

Oh and ESPN sells advertising for incredible amounts of money as their “secondary” revenue stream.

Why the Model Doesn’t Work Anymore

Years ago, I used to complain constantly about how the cable networks were charging me an exorbitant fee and forcing me to buy a bunch of crap that I didn’t want in order to get sports channels.  I felt I was subsidizing channels I didn’t want just to get sports. 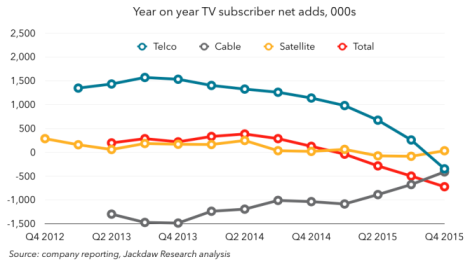 As it turns out, the average Johnny-cable-subscriber was actually subsidizing me.   Of the 88 million people who have ESPN, apparently a lot of them don’t actually watch sports.  But they were paying the equivalent of $7 per month (its actually more). Once they realized what they were paying for, some of them decided to yell and scream at their cable provider to remove ESPN and give them a cheaper NO ESPN package (it’s there, you just have to ask for it). 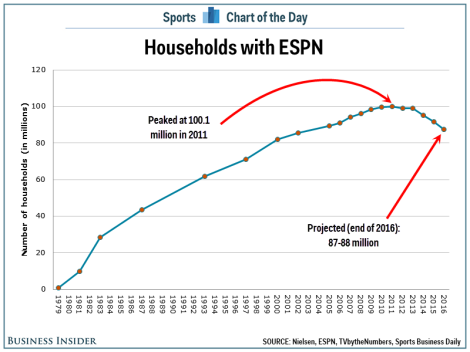 Others decided they don’t need cable at all, cancelled their cable and now exclusively use Netflix, Hulu, and other streaming devices at a much more reasonable price.

Basically cable companies and cable networks are losing revenue due to their own greed, but doing so very very slowly.  And quite publicly.  Sports networks are no different.

At the same time sports themselves have very quickly become the most valuable content in all of television.  It’s PVR proof, it’s exciting, and it has a target demo (Males 18-49) that advertisers crave.  The big sports leagues (MLB, NBA, NFL) know they have a unique and valuable property, so they are working to maximize their TV contract dollars.  They don’t care that ESPN is losing subscribers, and FOX Sports is hemorrhaging money.   They want their money and they want it now.  They are basically treating ESPN they way ESPN treated its subscribers.

How Do You Fix It?

What Was the Point of the ESPN Layoffs?

The salaries of these employees are a rounding error.  Remember, ESPN will pay $2.4 billion just for the NBA this year.  These guys might collectively make, what?  $20 million? These layoffs are a goodwill gesture to Disney and Disney’s shareholders.  Just to placate them, to make them think ESPN is dynamic, and other buzzwords that raise share price, until the next subscriber report comes out.

Despite name recognition, none of the ‘big’ ESPN employees were let go, no shows were cancelled.  If this isn’t a symbolic set of layoffs then I don’t know what is.

Where Does ESPN Go From Here?

The fact of the matter is ESPN is still a huge company, with billions of dollars in revenue, multiple sports properties, many of which are locked up until the early 2020’s. Additionally, though I doubt it, the market might be different then.

Maybe Fox Sports says ‘to hell with this’ and shuts up shop.  Maybe Yahoo and Twitter and the other digital platforms decide that live sports aren’t worth the headache.  Maybe ESPN is the only game in town and it just low-balls the bigger sports on packages, and gets some of its costs down.

Even if all of this happens, what is to stop the NFL, NBA and MLB from selling their games exclusively online through their own websites or networks?

Just like in sports, nothing is certain, and nobody can predict what will happen.  But ESPN just fired a warning shot.

The bad days are coming.