So there I was, traipsing through boxes of comics and pushing past costumed strangers at the ComiCon, when I got the call. It was my brother, and fellow Same Page contributor, Dennis on the line. He was being coy, but there was something he wanted to know. “What are you doing Sunday?” he asked. I told him I would be attending the Raptors game in what I believed to be some damn fine seats (at one corner of the court, about ten rows up). He told me I was upgrading. He had something better.

He had two courtside tickets. 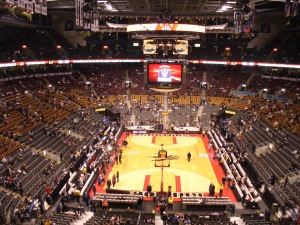 The crowds fill the Air Canada Centre. (Not shown: us)

For some (we call them the rich or spoiled), courtside seats are a matter of course. The tickets show up in the mail, or are handed to you by some corporate lackey, and you just roll into the stadium comfortable in your knowledge that you have the best seat in the house (luxury suites? Please). But for two ordinary Joe Raptors fans, courtside tickets are akin to flying first class on a top airline: they represent an opportunity that is far outside the ordinary, an experience to be cherished unreservedly, because the chance may never come again. Even knowing the game was against the Cleveland Cavaliers (re: they stink), we were excited.

We arrived at the game (too early, of course) and were promptly guided to our seats. The ushers and security guards looked on with initial suspicion as we lumbered down the stairs. Oh yes, we had the correct tickets. They’re for those seats right there. Row A, seats 9 and 10. Can’t put anything in front of Row A. What could come before A? We sat down. For the next three hours it was just us and one of the finest hardwood floors ever assembled. It was then that I revealed my long held secret desire to Dennis.

I really wanted to touch an official NBA basketball.

In almost every other sport, the chances of getting a ball to come sailing your way feels within the realm of possibility. Corralling a foul ball, an errant puck, even a poorly punted football, all felt like vague but reasonable goals. But in basketball, in the NBA, even the most emphatic of JaVale McGee blocks does not tend to clear the first three rows (despite what the excited commentator says in that previous clip). Not only did this game represent my only opportunity to sit in courtside seats, it represented my one chance, my only chance in perhaps a lifetime, to get my hands on an in-game basketball. During the pre-game shootaround, I felt like I would have been able to snatch a loose ball away from Kenneth Faried. I was on high alert.

After the usual barrage of music and pyrotechnics (which may have singed my eyebrows, sitting that close), the game got underway. And it was, in the classy parlance of the well-versed modern Raptors fan: shitty. With very little to play for (seriously, the Raps traded their lottery pick this year), we hoped for, at the very least, an exciting game. Instead, for much of the first half, Kyrie Irving sliced and diced the Raptors defense, Mareese Speights came on to bully his way to the net, and even Tyler Zeller hit a jumper or two. Meanwhile, with no Rudy Gay (I think his arms were sore from all those shots he jacked up in the previous Lakers game) and no Bargnani (pulled a heart muscle), the team looked confused, with only DeMar DeRozan around to take command. Unfortunately, despite some insistent yelling from Kyle Lowry[1], DeRozan decided to ease into one of those games that cause you to think really, really hard about what 40 million dollars must look like when it’s stacked onto a table. 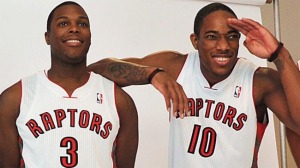 At the half, there was a touch of optimism. The Raptors had made gains and managed to get the deficit, which got as high as 17, down to single digits (9). This, if you believe in the basketball tenets of Doug Collins, is a very reasonable lead to surmount. As the terrible half-time show went on (seriously, grappling mascots? Someone get the Cirque du Soleil on the line), my eyes started wandering, looking at the people around me. Not surprisingly, the sense of camaraderie in the courtside area is not high. It’s mostly a mix of vocal but overwhelmed kids, obviously rich middle-aged guys, and some trying-too-hard-to-be-nonchalant couples, with serious Raptors fans few and far between. There was one mountain man present wearing a Raptors jersey, but it had his own name on the back. With the number 69. He doesn’t count.

With play in the second half commencing and the Raptors charging back, it was remarkable to witness how fast and terrifyingly beautiful the game of basketball can be[2]. Look, I don’t mean to get all Morgan Freeman voiceover on you here and I didn’t need to sit right next to the court to realize this, but basketball can be an amazing game. Was I starting to get frustrated that, despite all the errant shots, the ball boys and refs were doing a damnable job of keeping every loose ball away from me? We had sat through almost three quarters of the Raptors losing, been close enough to Luke Walton that he could have farted on my brother’s head, and still no touch. Now, at least, I know how Jonas Valanciunas feels.

We headed to the fourth quarter. And then it happened. During a dead ball play, a shot was fired up by one of the Raptors players (I’ll assume it was Alan Anderson, because the shot missed). It caromed off the rim, and was bouncing along the floor towards the far sideline. Straight towards me. This was my moment to shine, my moment to touch an active NBA game ball, to be a part of the modest ebb and flow of the game. Am I overstating this moment? History will decide. But I can assure you, it felt like the gears of the universe had somehow aligned to allow for this particular ball to come bouncing along on this particular path right into my waiting hands.

I caught it on the bounce, felt its pebbly surface, the weight of it. I glanced around, and seeing no readily accessible targets, dared for the impossible. I gave the ball two quick dribbles and then, coolly acknowledging the referee, I tossed him the ball with a compact chest pass (give me a break, I was sitting down)[3]. Understanding the import of the moment, he too chose to underplay it by simply catching the ball, turning back to the court and giving it to the inbounding Cavalier. I give him tremendous respect for keeping his professional cool.

As luck would have it, the Raptors, despite being heavily down for most of the game, managed to power themselves to victory thanks to a monster performance from Amir “I no longer hate his contract” Johnson (tied a career high with 16 rebounds), and some timely shooting from Alan “I need to shoot as much as I can while I’m in the league” Anderson. Now, were the Raptors aided by the unfortunate absence down the stretch of All-Star Kyrie Irving, who hit the deck hard after running into Valanciunas? Possibly, but a win is a win (and I’m sure Kyrie will be fine). I’d like to believe, though, in some small way I managed to keep the good karma flowing for the Raps with my savvy inbounding manoeuvres. Rather than cheer wildly when DeRozan hit the game sealing free throws, I nodded knowingly. We had come back and won the game, 100-96.

And yes, you better believe I enjoyed the free pizza.

[1] I wish I could tell you what Lowry was saying, but even sitting 15 feet away it was impossible to decipher. Part of this I’ll blame on the terrible, terrible decision to play music almost non-stop during the game, but also because, well, I just straight up could not understand what the hell Lowry was yelling about. The man really gets agitated.

[2] Also fast and terrifying beautiful when in close proximity: the Raptors Dance Pak.

[3] I should mention here, in the interests of full disclosure, that some kid, who had jumped from row B to row A (the nerve!) to sit next to me, kept reaching in to touch the basketball. Look kid, you’ve got a long life ahead of you, and, from the look of it at the time, a rich father. Let me have my moment. I regret nothing.

4 responses to “The View from Row A: My Raptors Courtside Experience”