There was a telling moment in this week’s Mad Men that presented a fascinating different perspective of the recent events on the show. From the very beginning, Mad Men has been a show about perception. I admit, it’s a fairly obvious connection to make since we are talking about a show set in the advertising industry. Still, this week, we saw Don grapple again with Megan over, ostensibly, a fake TV romance that he claims she enjoys too much (while he slinks off to be in a fake romance with Sylvia that he’ll only enjoy for a little while). You have to hand it to Megan, she is trying very hard to maintain their actual relationship, not just the appearance of it. This can be a real problem, especially when Don implies that Megan is a prostitute. That kind of stuff tends to destroy positive perceptions quickly.

It is also a problem for Joan. After being relegated to the background for a few episodes, Joan gets her own side-story in this week’s episode with a visit from her friend Kate and a night out on the town. They are chasing a dream of their past, a more innocent time. Sure, Joan complains about the high school era restaurant they find themselves in, but don’t think she doesn’t appreciate the sentiment, if only for one night. After being praised by her mother, and admired by Kate, she’s allowed to forget about some of the sad, ugly Herb-shaped truths of her position. While Joan’s competency and place within the company are not in question, Harry’s blunt power play (he’s a smooth operator, huh?) reminds us that Joan wants to forget that same past, despite how far she’s come.

Yes, Harry finally charges into the partners meeting to lay out some demands. Of course, since we’re talking about Harry, he had to do it in the most morally reprehensible way possible by dragging Joan through some mud. He wants power and respect, which you can’t demand, and he does not want to be seen as a joke anymore. Roger and Bert ably diffuse the situation, and while they may have underestimated the goofy dope, he is still just goofy dope (albeit a motivated one).

And finally, emerging from the deep halls of the SCDP offices, there is Dawn with her own set of perceptions. This is when we get to that telling scene I was talking about earlier. Dawn may be all smiles and competence, but when she leaves the office she admits to the “women crying in the ladies room; men crying in the elevators.” It is like New Years, she says, with all the bottles rattling in the garbage bags. She even mentions that “poor man” who hung himself in his office. Look, we love jumping into the bright vision of the SCDP offices, we get caught up in the beauty and drama of it all. But then, there is Dawn, a character we maybe only remember because of a bad Roger Sterling joke (“darkest before the dawn”), poking a hole in the glittering facade. Everybody is working so hard to maintain, to repair, to build the idea of themselves but even the secretary who is “keeping her head down” can see through the illusions.

2) Penny under the mat

We have to talk about the swingers, right? Alright, deep breath.

Here’s the thing about being a swinger: once you admit to being involved in the swinger lifestyle, it totally colours every interaction you have with all of the non-swingers. It becomes the thing that people remember you for (this is doubly true if you’re a just introduced fringe character on a TV show). Now, I know what you’re thinking; swingers are just people and they contain multitudes beyond their swinging. Oh really? Quick, what were the names of the two swingers? No cheating, errr, I mean, don’t Google it.

And, time. You came up blank. You see what I mean? Their names are Mel and Arlene but you don’t remember that because all you remember is Mel, played by Ted freakin’ McGinley, smoking his cigarette and cooing, “We’ll smoke some grass and see what happens.” How can it be possible to remember anything else about anyone after that? And then, just to compound it, later Arlene slides in with a “You like to watch, do you?” Just out of nowhere!

Look, I know that ‘swinging’ was not entirely forgotten after the 1960s and 70s (though it definitely got more depressing in the 70s). There is still a contemporary swinging movement happening (polyamory) and that’s fine. But, I think it is fair to say that when Don Draper is getting weirded out by you sexually, you’ve probably gone far enough.

Really rough week for Ken this time around. Last week, he was all smiles with Heinz ketchup in his sights. Ever the excited one, Ken even told everyone that he had signed ketchup. He had it sown up, in the bag, on lock down. But you just don’t tell people you have signed ketchup until you have actually signed ketchup. To wit: this week, Ken did not sign ketchup. In fact, not only did Ken lose ketchup but due to all of SCDP’s clandestine operations (including tinfoil covered windows), he also lost baked beans. How sad is Ken feeling this week? He got dumped by Raymond, the baked beans man.

But wait, there’s more! While the ketchup fiasco was happening behind closed doors, poor Ken gets lashed to the mast of the Harry Crane experience as he (a) comes up with the Broadway Joe on Broadway TV spectacular and, I mean, wow; and (b) stand as mute witness as Harry crashes on the rocks of dignity and good taste by throwing Joan completely overboard in a bid for money, power and respect (and a partnership). How often does Ken have to rhetorically ask Harry, “Do you know how hard it’s getting just to tell people I know you?”

We’re four hours in now and I’ve sat back on this conflict long enough. Megan and Don. What is going on? Week after week now, the most tense part of the show has been their interactions. We see Megan tiptoeing around the apartment trying not to ruffle Don the wrong way while he blithely forges ahead with his latest affair. This latest issue? Megan’s expanded role on her TV soap opera and the aforementioned ‘love’ scenes that Don, naturally, does not approve of. I’m going to let the irony on this one just lie there. It is pretty unbearable.

To be honest, thinking too hard about their relationship is what makes these scenes of marital discord so difficult to watch. Remember when the appearance of the Draper-Calvet union seemed perfect? These were two beautiful people, coming together beautifully, to lead a disgustingly beautiful life (I mean, come on, their life together was so beautiful it drove Betty to binge eat). We all wanted to believe in this new version of Don, with his newly assembled reality as a loving, supportive husband. But we knew.

We knew he’d find away to unravel, lose interest, undermine. Megan is willing herself to success, ever climbing towards her goals as an actress. She doesn’t need Don for everything, but she does want him to believe in her; to embrace the dreams she has for herself. Don perceives things differently and since his whole life has been a lie to someone, he thinks he can always see through the fabrications.

Remember last week when we talked about the different types of meetings that happened at SCDP? Well, today we got a brief version of #1 (The Don Savant Special). After having Stan squirreled away working on Project K (Project Kill Machine? Never change Ginsberg.) Don makes his top secret pitch to Heinz Ketchup. You realize we’ve now spent four hours dealing with some of the ins and outs of the ketchup industry? I just can’t let this go.

Anyway, Don, Stan and Pete make the pitch. They’re about as close as SCDP can get to a dream team (assuming Don isn’t hammered) and it shows. Don makes his speech, Stan rolls out the art, and Pete is there to tastefully cut off Stan before he can give some rambling stoner answer about his work. Tell me you weren’t feeling a little hungry after looking at those mock Heinz ads. I was in the process of convincing myself that their idea actually was a Heinz ad that was used back in 1968. The twist of truth comes next, however: Teddy, Peggy and the gang are also on hand to pitch to Heinz. In what feels like the most effective knockout blow to aspirations in the episode (even more than Bert assuring everyone that Harry won’t get promoted), Peggy appears to out-Don Don, using classic lines of his about changing the ketchup conversation. Her victory feels assured.

Yet, astoundingly, everybody loses. And, since apparently there is only one bar in NYC, all of the losers (plus, poor, poor Ken) run into each other at the same tavern. Somehow, the patented Don Draper-esque pitch failed twice. And as Teddy so eloquently puts it, it turns out they were all just fighting over the same small scrap (of ketchup). 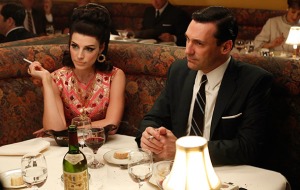 Yes guys, there is something amiss here.

There was no “On the Next Episode” montage to conclude this week’s Mad Men. The show just… ended. The graceful music playing over the credits finished, the AMC logo appeared and then, as if stuck on some cruel moebius strip of entertainment, the episode began anew.

I am completely adrift. Our reality is an illusion. Our perceptions are false. There is no God.

(And we’ll see you next week.)