Rudy Gay is no longer with the Toronto Raptors. The reaction to this news from Raptors fans has been one of ecstatic release. But please, hold your applause until the end of my column. Just how did we get here? Not long ago, to paraphrase the subtitle of that X-Files movie no one saw, we wanted to believe. We wanted to believe that Rudy Gay was going to change the Raptors in some way. He did, I suppose. But, much like that X-Files movie, no one wanted to watch anymore (outside of Toronto, and even then). Yes, somehow, the Rudy Gay era became even more unbearable than what had gone on before (the Bargnani era? Yikes). The ball was always in the wrong hands, the offense was usually ugly, and despite a few instances of late game heroics, Rudy Gay was no franchise savior (11 for 37 – Never forget). Still, we wanted to believe that Gay would become the dynamic wing player the Raptors had been missing since Vince Carter. Past tense. Today, the Raptors organization (and its fans) are happy to see him go.

Rudy Gay in his natural habitat.

That being said, let’s talk about the trade particulars, point form style. As part of the deal, the Sacramento Kings get:

Now I know you come here for cutting basketball analysis so I’m gonna give this a shot. Here it goes: I have no idea what the Kings are thinking here. On the one hand, they definitely wanted to clear some space at point guard to allow more time for Isiah Thomas Jr. They’ve done that. Kudos. The other hand? The other hand probably has a basketball in it because, with Greivis Vasquez gone, no one on this team is willing to pass. Rudy Gay will now be paired with DeMarcus “Boogie” Cousins (everybody’s favourite teammate), the team will attempt to run pick-and-rolls that Gay will want no part of, and the Kings will collectively chuck up a ton of shot and lose a bunch of games. It really is just too bad they can’t play with two balls on the court at the same time. Also, Aaron Gray and Quincy Acy will resume their duties as end of the bench good guys. 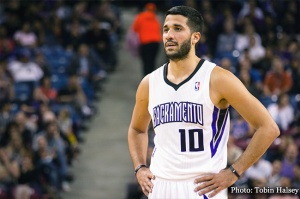 For the Raptors, the reasons for the trade are obvious. Rudy Gay is owed a ton of money. He has one more year on his deal, a player option for 19.3 million. I feel confident in saying that he will pick up that option. Naturally, teams would be set to offer Gay some money, but 19 mil? Gay has to know that he may not see that kind of money again. The financial benefit for the Raptors is only part of the deal, however. 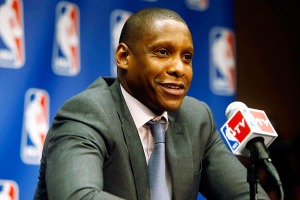 Theoretically, Gay’s removal from the lineup makes them “worse”. How much worse really, though? With Gay gone, the offense simplifies itself to DeMar DeRozan’s driving game, Jonas Valanciunas’ post game, and whatever shooting they can get from Kyle Lowry, Steve Novak, Terrence Ross et al. Speaking of which, now is the time for Ross to finally get his shot (though I’m sure Landry Fields will get a lot of playing time still. Clearly the Raps are serious about tanking). It’ll allow them to play a nice two PG lineup with bulldog Lowry and the cerebral Vasquez. And ideally, the pick-and-roll game will come back to the fore. Still, the Raptors are aiming to be bad. Dwane Casey is still going to coach them into the ground. The mirage of the top 5 pick, the allure of alien potential witnessed in Andrew Wiggins, Jabari Parker and the like, starts to more clearly resolve. The Rudy Gay era was extremely short lived. We believed, then lost faith and, thanks to GM Masai Ujiri’s clever work, we’re ready to believe again.