So this is how it begins, not with a whimper but a bang. Or something. There is definitely a chuckle or two in there, plus wacky characters, spaceships, guns, explosions. Did you see the trailer? Yeah, Marvel’s Guardians of the Galaxy. I know what you are thinking: who? But, before we get to that prepare yourself for the next wave of Marvel’s movie takeover plan.

To read the history of Marvel Comics is to subject oneself to a story of youthful exuberance crushed by adult failure. Stan Lee, equal parts grandfather and ringmaster of the Marvel empire, had already been put through the ringer by 1960. In a post-Wertham world where no comic book was safe, Lee was hanging on by a thread.

Then, teamed with the legendary Jack Kirby, inspiration: the power cosmic imbued Fantastic Four, followed by Spider-Man, the Hulk, Iron Man, Thor, the X-Men. It is hard to escape the mind tentacles of the Lee-Kirby alliance today, 50 plus years later. We know those guys.

But both Lee and Kirby, and a host of their acolytes, always looked beyond the earthly plain for inspiration, they looked to the cosmos. This was the early 60s, of course, when space exploration was the issue de rigueur. So, the Fantastic Four got bombarded with cosmic rays, Galactus came to consume the Earth, and the Silver Surfer wandered the universe looking for understanding and self-actualization.

Kirby would go on, after an acrimonious split with Lee and Marvel, to craft new universes filled with new characters – New Gods, in fact. The subsequent Marvel Universe that Lee helped birth produced more space-faring characters: Captain Marvel, Thanos, Nova, even Howard the Duck. And while many had their roles to play, you’d be hard pressed to name cosmic characters that could crush their earthbound contemporaries in popularity. Did you know they made a movie out of Howard the Duck? It bombed; Marvel’s interstellar ambitions thwarted.

Leapfrog ahead. Marvel in the 90s is bankrupt, struggling. They manage to finally rustle up movie versions of three of their most iconic titles: Spider-Man, X-Men, and the Fantastic Four. The money rolls in, the company is reborn, Marvel Studios is created. Now, the company will decide its own film destiny (well, until Disney buys them for four billion dollars a few years later).

Then, the plan: make an Iron Man movie. Who cares about Iron Man? 318 million dollars later. People care. Try to remake the Hulk. Seems ridiculous, but now, look again, the Easter egg at the end, Iron Man in the Hulk movie. A film universe flashes into existence, just like the comic one had decades before.

What follows afterwards is just tsunami, aftershock, summer oblivion. Thor, Captain America, Avengers, a second Thor, a second Captain America (coming soon), eventually more Avengers. Once the beachhead of Iron Man had been achieved, it was just a matter of laying out a marketing assault to prepare for the landing of the Avengers, the ultimate goal. But, true believers, that was just the opening phase, a team building exercise.

Marvel history is dotted with attempts at movie stardom. Lee spent the better part of 30 years attempting to break into Hollywood. There was the Hulk TV show and a misbegotten Captain America movie; wrangling over the Spider-Man rights cost untold millions. The real aim was to eventually launch every Marvel title into it’s own multimedia orbit. If the comic titles could stand on their own, why not the films?

And so, true trial number one: Guardians of the Galaxy. 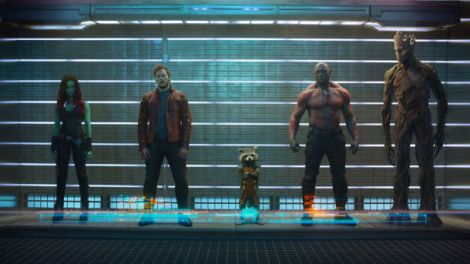 The risk with launching any new movie is really based on that old chestnut: fear of the new. People want familiarity. If that familiarity doesn’t come in the names of the characters, then they want it, at the very least, in the names of the actors. But Marvel, oh they are getting brazen. What Iron Man lacked in cachet at the time, Robert Downey Jr. filled in with charisma. What Chris Evans was missing in name recognition, Captain America made up for in iconography. But now, Guardians of the Galaxy is attempting to quietly spurn both. The first Marvel film sold largely on the Marvel name itself. We are quality entertainment, Marvel says, that’ll be $12.99.

While I lag behind Same Page contributor Alex Correa in general comic knowledge (he’d be the first to tell you that), I figured I’d circle back to answer the question so potently poised in this column and, wisely, the trailer: WHO?

Let’s fend off the creeping sense of confusion together.

The Deal: Once upon a time Drax was just plain old Arthur Douglas. That is, until Thanos came along and messed up his whole life. I hate when that happens. Fortunately, cosmic being Kronos happened to put Douglas’ spirit into a powerful new body. Since then Drax has gone after Thanos (obviously) and also had showdowns with Captain America. Go figure.

Real World Commentary: Can we give Dave Bautista a hand? At one time he was just the fourth member of a Horsemen-redux wrestling faction. He was the silent muscle who’s wrestling ability never quite matched up with his physical charisma. But now? He’s making Marvel money! Not even the Rock has gotten his career here.

The Deal: So it turns out that Gamora is actually the last of her kind and, whoa, the adopted daughter of Thanos. So yeah, her species was wiped out but Thanos saved her. Man, that Thanos, what a guy. But wait, he kept her alive so he could turn her into a weapon. There we are, that’s the Thanos I know.

Real World Commentary: Not to get all Brian Regan on you here but what is the deal with Zoe Saldana and how is she getting into all the other movies? That aside, I’m sure she’ll be fine.

The Deal: Keeping the talking animal tradition alive, Rocket Raccoon is, as the picture suggests, quick with a gun, feral-looking as an actual raccoon, and also the protector of the Keystone Quadrant (which, presumably is not beer related). I’ll be honest, it is hard not to like this little rascal.

Real World Commentary: While the trailer doesn’t give this away, I think we can look forward to a delightfully ribald and ridiculous performance from two time Academy Award nominee Bradley Cooper. He was once in a movie playing a character named Sack. Also, I remain undecided as to how much influence this had over the character’s name.

The Deal: A big walking, talking alien tree. What the hell else could you ask for?

Real World Commentary: Frankly, this is amazing. Outside of movies with either the word Riddick or Furious in the title, Diesel is a non-entity these days. I am happy to see this changed. And lest we forget, the best movie Diesel was ever involved in was actually one where he got to voice a large thing from outer space.

The Deal: Where to begin? Peter Quill, raised by a single mother (who is eventually killed by aliens), becomes a trainee at NASA. He meets the Master of the Sun (not the Champion) who offers the title of Star-Lord to the most worthy trainee. Quill doesn’t make the cut but decides to steal a ship, along with the mantle, and become the leader of the Guardians of the Galaxy anyway.

Real World Commentary: For real, Chris Pratt needs to become a big movie star. For most people (I say most, because Parks and Recreation is criminally underwatched), Pratt is a vaguely familiar presence. He’s got the kind of face and voice you want to remember. This is because Pratt is also a human charm and comedy machine. Yes, we have reached a day when Andy Dwyer can, within 18 months: be involved in the killing of Osama bin Laden, save the Lego universe, and captain a team of galaxy guardians. Vive 2014.

And there you have it. You are now approximately up to speed on Marvel’s designs for your summer. We have a hopeful franchise film, a movie based on pre-existing properties; I suppose we should be calling it a craven venture. Yet, at this point, what’s one more? Why can’t we have the intergalactic space movie with Bradley Cooper as a talking raccoon?

With a Paul Rudd led Ant-Man on the way and the Avengers colossus marching on, we are clearly living in Marvel’s world. Of course, with Marvel it has always felt like conquering the world was never enough. The cosmos are still out there.

2 responses to “Role Call: Who are the ‘Guardians of the Galaxy’?”