There are eight NBA playoff series starting this weekend. There are also a veritable mountain of sites that are currently working through the various permutations and predictions that the first round entails. I have a different angle. For the opening round of the NBA Playoffs, let’s forget the predictions. I’m telling you why you should watch or not watch any given series. Now, shoot. 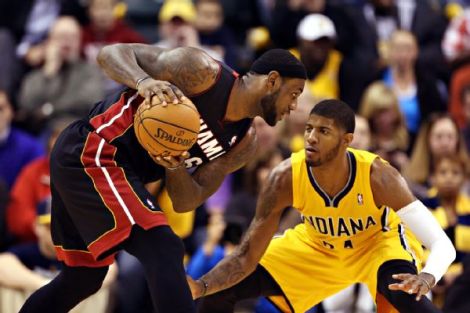 Miami and Indiana: the only Eastern conference teams that most people are talking about.

Reason to Watch: Primarily, you can watch the ongoing Indiana disaster show. For the last few months of the season Indiana has been on a dramatic death march into the playoffs. First they signed Andrew Bynum, noted team chemistry savant, and then traded Danny Granger, oft-injured folk hero, for Evan Turner, a player most in Indiana probably wish would get injured. They started losing more games than they won, started airing grievances in public and managed to sort of accidentally win the Conference as Miami continued to rest and ease into the playoffs like an old man getting into a bath. Phew.

Or, watch the series to see Atlanta’s Pero Antic do his thang.

Reason to Avoid: The obvious reason is right there in the two team’s records. Indiana won a decisive 56 games this year while playing some earth-crushing defense. Meanwhile, the 38-win Hawks almost lost out on a playoff spot to the Knicks. The 2013-14 New York Knicks. Let that sink in for a second. This is not a particularly good Hawks team. And I can say that without even mentioning that Elton Brand figures prominently in their rotation. Watch at your own risk.

Reason to Watch: As a fan of professional basketball, you should probably watch the Miami Heat just on principle alone. When they are firing, the basketball they play is truly magnificent. The ball snaps around the court, 3s are rained down with impunity, and there are usually a few thunderous dunks. Plus, those Chris Bosh faces, man. Yes, as a basketball fan in 2014, it is important to remember that we still live in Lebron’s world.

On the flip side of that beautiful coin is the Charlotte Bobcats. They are not a beautiful team, being as they are comprised mostly of men who can’t shoot the basketball particularly well (Kemba Walker, Michael Kidd-Gilchrist, Gerald Henderson). But there is a certain anger to be found in a team ignored (believe me, I’m a Raptors fan). With Al Jefferson going about his methodical destruction of everything within ten feet of the hoop, and a roster that ranks among the top 10 on defense, the Bobcats are playing to have their true identity acknowledged on the biggest stage. They must know they can’t actually win it all, which means – stay with me here – they can’t really lose. This one may be worth checking out.

Reason to Avoid: Quite simply, Miami eats up teams that are this one-dimensional. The Heat are fearsome along the perimeter when they want to be, and the idea of having to focus on only one clear cut offensive option (Jefferson) for four games must fill their minds with glee. I can see the Bobcats maybe making a few games interesting, grinding down the Heat for as long as they can. But at this stage of the game, beautiful basketball or not, Lebron is inevitable. This is a coasting 4-0 series victory. 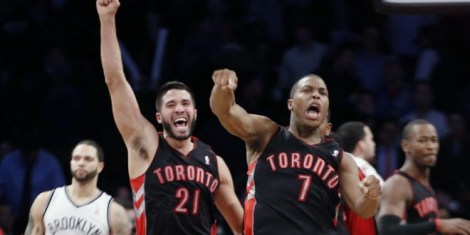 Reason to Avoid: If you’ll allow me my homer moment here, I don’t want to watch the Raptors lose in the first round. I’m having 2007 flashbacks. A city would be crushed, a nation in mourning. I don’t even want to think about this, a world where Joe Johnson’s impassive face and Deron Williams’ stupid haircut get to move on to the second round. I apologize for the brevity of this section as a whole. Let’s just move on.

Reason to Watch: Now, here’s a study in contrast. The Bulls spent most of the year relying on whatever offense they could squeeze out of Carlos Boozer, Jimmy Butler and Taj Gibson; D.J. Augustin was seen as a key shooter for them (D.J. Augustin!!!). If not for the transcendent play of Joakim Noah, who definitely is worth watching, and the maniacal coaching of Tom Thibodeau, the Bulls should have been in rebuild mode (with the Derrick Rose injury and the trade of Luol Deng, it seemed like that was the plan). Somehow, they are the 4-seed. Their identity is just that firmly entrenched. They refuse to lose. This is remarkable in its own way.

The Wizards, meanwhile, constantly appear to be playing above their head. Their character is still somewhat in flux: How important is Nene? Do we trust Marcin Gortat? Is Bradley Beal the answer? Can we decide whether or not John Wall is a good shooter? Watch this series for the hopeful answers to these questions, the inevitable cavalcade of Wall highlights, oh and maybe a Gortat/Noah fist fight.

Reason to Avoid: I don’t know, are you excited for this series? The Bulls play some remarkably ugly basketball; they have to in order to survive. The Wizards have some hugely talented players (Wall and Beal chief among them) but you just never quite know what you’re going to get. It’s a combination that will inspire some 78-74 scores just as likely as a 114-91 tally. I just feel like it’s going to be that kind of series, e.g. a sloppy, weird one.

Reason to Watch: Ah yes, we meet again, my old friends. In the Dirk Nowitzki era, the Spurs and the Mavs have met five times. The 15-year series stands at 3-2 for San Antonio. That’s a nice bit of historical perspective. Both teams have had their successes against each other. And let’s not forget the songs they still sing in Dallas about that vaunted 2010-11 team, the one that won the championship. They’ll always have that, won’t they? Sorry if this is sounding quaint. I’ll explain.

The thing is, the Spurs are on a road of vengeance. You know that scene in Gladiator when Maximus takes of his helmet and reveals all to the Emperor? Think of the first three rounds of the playoffs as everything that happens before that. The Spurs want revenge on Miami and I’d be lying if I said it will not be entertaining to watch them chew up all the teams that get in their way. No way – no way – does even this delightful Dallas team (Vince Carter excepted) become anything other than a speed bump for the unstoppable chariot that is the Spurs.

Reason to Avoid: I suppose I could go with the “Spurs are boring” adage, but that is definitely incorrect. It is true that Manu doesn’t play in quite the same eye-popping way as he once did, and that Kawhi Leonard, Patty Mills, Boris Diaw and Marco Belinelli lack a certain je ne sais quoi, and dammit I don’t know how many more times I can watch Tony Parker calmly obliterate another point guard (sorry in advance Calderon). The Mavericks are canny, but the Spurs are out for blood. This may be a “massacre of childhood dreams”-type of series.

Reason to Watch: I want the Memphis Grizzlies to succeed. There, I said it. There is something so lovable about a team in 2014 that plays true inside-out basketball, has no reliable 3-point shooters (except maybe the undead Mike Miller) and lives and dies by its patented – with T-shirts and everything – grit n’ grind mentality. They’ve earned that nickname, by the way. It ain’t always pretty (unless Marc Gasol is throwing some mind-bending passes), but you gotta love it.

Reason to Avoid: At this point, it is impossible to be a basketball fan and not want, desire, yearn, to watch the aforementioned Durant (ask Seattle how the yearning truly feels). And if you don’t like the current iteration of Z-Bo, spirit warrior, then there is something wrong with you. Avoid this series if you have more pressing life matters to attend to. Otherwise, there is no excuse.

Paul and Curry: best of friends.

Reason to Watch: Let’s be honest: the Western Conference playoffs are loaded this year. Case in point, look at all the names involved here: Paul, Griffin, Curry, Thompson, Jordan, , Crawford, Iguodala, Granger, O’Neal, Lee, Big Baby, Turkoglu. I mean, shit, this series reads as a who’s who of the NBA in the last decade (or decade plus, if we are indeed counting Jermaine O’Neal). Toss all those players into the playoff blender, give them two games (at least) played in the pressure cooker that is Oracle Arena, and you have a scintillating playoff series.

Reason to Watch: This has the potential to be a real wild west gun fight of a series. The Rockets are like that rec league team filled with gunners that can win any game at any time or completely shoot themselves in the foot. And the Blazers are like that rec league team that, um, is also filled with wild gunners that can win or lose on a whim. Not just that, this series also has: the presence of the insane Patrick Beverley, the love-to-hate Dwight Howard, the sublime (nut-puncher) Nicolas Batum, the unkillable Mo Williams, the beard of James Harden, the ghost of Bill Walton, and more. Basketball is so fun sometimes.

Reason to Avoid: I suppose purists will be heard decrying the almost comical lack of attention paid by James Harden to the notion of defense. But that’s all I got. This is a tough one to talk down since both the Blazers and Rockets have been involved in some highly entertaining games this season. They both play an up-tempo style that involves a lot of exciting 3-point shooting and fast movement, they both feature thrilling superstar calibre players (Harden and Aldridge, first among them), and both will have crazy playoff crowds. Hmmm, Houston might shoot a lot of free throws? That’s boring, right? I got nothing.

It’s the NBA playoffs and it starts on Saturday.

7 responses to “Your NBA Playoffs TV Guide: What to Watch and What to Avoid”