Dwane Casey, head coach of the Toronto Raptors, was seen on the southbound subway last Sunday. Apparently, traffic downtown was backed up. When reporters caught up with Casey they asked how he had ended up on the TTC that particular afternoon. Casey said, “I don’t think anyone expected us to be here today in that they had a marathon and a Game 7 in the same day.”

He said this before the game, before heading into an Air Canada Centre that would soon be full to bursting with people, before heading past Maple Leaf Square – renamed Jurassic Park – which would later deal with the overflow, a volume upwards of 8,000 to 10,000 fans.

The Raptors were about to play in the franchise’s first home Game 7. I don’t think anyone expected us to be here. 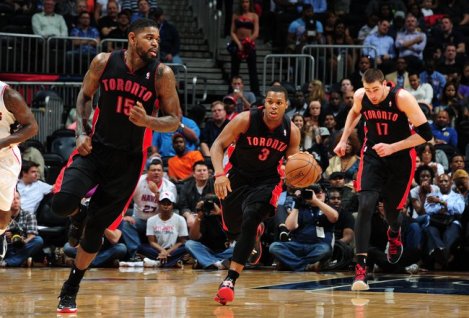 We probably forget this now, lost in the euphoria and heartbreak, but the 2013-14 Toronto Raptors were supposed to be bad. They were supposed to be dumping players, shedding salary, and tanking. We bemoaned the presence of Rudy Gay, and there was much rending of garments whenever Landry Fields and his salary were mentioned. The narrative was simple: this team couldn’t win, and no one wanted to watch it lose. The Raptors were staring down another lost season, one sold purely on hope and optimism for the future. They had a new general manager in Masai Ujiri, even a new hype man in Drake, but their legacy as NBA footnote felt re-assured.

But we all sat down to watch a Game 7 anyway. How did we get here?

I suppose I have to start by mentioning the Rudy Gay trade (for the last time). Yes, the team was an unwatchable 6-12 on the day of the trade. And yes, Gay’s removal from the roster loosed the ball in an offensive system that began to highlight the strengths of this young, athletic Raptors team. It rarely happens that way, an addition by subtraction for a team already forgotten. The narrative pull is usually too powerful. The Raptors should have disappeared.

I don’t think anyone expected us to be here.

The longest serving Raptors are DeMar DeRozan and Amir Johnson. The former thought to be nothing but an overpaid chucker, and the latter a limited big man. When the team signed Johnson to a contract that would see him eventually make close to 7 mil a year, I admit I thought they were crazy. But then you watch Game 7 again, and there’s Amir, on one leg, pouring in points in the first half, keeping his team in it. Foul trouble ultimately derailed Johnson’s day, but no one ever questioned his heart. I can’t imagine the team now without Amir’s frenzied energy.

DeRozan’s contract looked like the final insult of the Bryan Colangelo era, sticking the roster with a low efficiency shooter (at 9.5 mil per) who didn’t rebound and couldn’t pass. Yet, check his yearly stats. Every season, like clockwork, the numbers go up. Points, rebounds, assists, free throw attempts. Game 7 was not his finest hour, but it turns out DeRozan was battling the flu. He played 45 minutes anyway. Not bad for a ninth pick drafted after Hasheem Thabeet, Johnny Flynn and Jordan Hill. He made the All-Star team this year to boot. I now believe you can go to war with DeMar DeRozan.

Likewise, Terrence Ross and Jonas Valanciunas were drafted by the Raptors. Jonas remains heralded as the future of the franchise, potential personified. He’s just 21 years old and averaged almost a double-double against a front court of Paul Pierce and Kevin Garnett, future hall of famers. Sadly, the moment was too big for Valanciunas on Sunday, but one wonders what will happen with a few more years under the big Lithuanian’s belt. Look out. You saw flashes of it with Ross as well. He played an invisible series, got bullied by Joe Johnson and outsmarted by Deron Williams, almost all of his shots looked terrible, but then there he was scoring big points in the 4th quarter and making the play of the game: stealing the inbound pass after throwing it off Pierce as he fell out of bounds. He’s 22 years old, just getting started.

Fortunately, even when the really young guns were faltering, the Raptors had bench players to fill in. The under-reported story of the Gay trade was who they got in return. Suddenly, a bench was there. Greivis Vasquez played with the ball in his hands and without. He made passes and hit threes, whichever was needed more. After the game Vasquez said: “I want to be back. I truly want to be back … It will truly be heartbreaking if I’m not back.” What more can you say? Patrick Patterson joined him, he said the crowd was “magical” and used that energy to shoot a perfect game; he was 5-5 from the field and 6-6 from the line in Game 7. He could guard every forward and stretch the floor with timely long bombs. The impact of these two guys cannot be overstated, yet Patterson is on his third team, Vasquez his fourth. They’ve found a home in Toronto.

Of course, we have to turn towards the end of the bench: the steady veteran John Salmons, the cuddly Chuck Hayes, the ridiculous Tyler Hansbrough, even Steve Novak, Fields and late comer Nando de Colo had a part to play somehow. Some of these names probably won’t be back (Salmons is definitely gone; and I want to believe Fields could be used as in a salary dump trade), but they’ll always be remembered now. There were no malcontents here, no players to be endured.

Finally, we come to the engine, Kyle Lowry. He who just would not stop; he should be too small, too slow, too earthbound to be a star player. Lowry was told he was not an All-Star this year, even after he muscled his way, through sheer will, into a leadership role on an upstart team. The bottom line, even after he struggled at times in the series getting his shot or passing out of double teams, was that with Lowry you always have a chance. He threw himself into bigger bodies again and again and again for seven games. Lowry would not quit. He’s a free agent next year, and was almost traded this year. I hope the Raptors bring him back for another chance at the playoffs with this group. I hope he wants to come back. As hard as Lowry worked this season, he deserves that shot (and whatever money he asks for).

If you’ve been reading along on the Panic Watch, you know by now that this is the most effusively positive I’ve been about the Raptors thus far. Next year the franchise will be 20 years old. Quite frankly, there have been rosters that can spin your mind into oblivion; teams anchored by Rafer Alston or Mike James, graced by a half-dead Olajuwon, mired in the Bargnani era, weighted by the albatrosses of Yogi Stewart, Joey Graham and Oliver Miller. The broader NBA world doesn’t care about these stories. The tenor of the ABC broadcast on Sunday could best be described as mildly amazed. They couldn’t believe we cared as much as we did. Isn’t this the place that goes crazy about hockey? Instead: close games, lint roller specials, crazed crowds, inexplicable momentum, veteran savvy, youthful exuberance. We saw it all.

I don’t think anyone expected us to be here.

For me, I wanted the Raptors to win their series with the Brooklyn Nets not because I thought they had a chance for the title, or really, against the Miami Heat. As always, I wanted them to win to spurn that same old narrative, that story that says basketball in Canada is no big deal, that we’ll always been defined by the messes of the 90s, by the Carter missed shot, by our best players leaving for greener pastures. These Raptors couldn’t quite get it done. The Nets made enough quality plays, had enough strength, talent and luck to carry them through. It was never about the referees. While it pains me to write this, at times it was clear the immensity of the moment was far too great for this young team from Toronto. The NBA world has already moved on. Bigger moments await. But goodness, I have such hope. It can’t all have been for nothing, right?

I don’t think anyone expected us to be here. After this wild tale of a season, now I can’t imagine this Raptors team being anywhere else.

One response to “Requiem for the Toronto Raptors”