It’s all done. 11 days, 10 films. More lines than I’d care to remember. This year’s festival started off in panic, and ended up coming together fairly nicely. (Even better than last year’s premeditated approach). Of the films I saw, all were at least watchable if not completely astounding experiences. I’ll count that as a win. But now, let’s not waste anymore time and get to it. The final batch of reviews!

Short film anthologies are always a risk; maintaining a level of quality and energy is tantamount. The Argentinian film Wild Tales  from director Damian Szifron appears to understand this. The opening short of his film involves a disgruntled man flying a plane into his parents house. Read that sentence again. That’s the opening scene! Still, the craziest thing about watching it is the reaction: you’ll be laughing hysterically. Wild Tales is a film that pays off.

Szifron has constructed Wild Tales as a series of absurd vignettes that poke at different aspects of life in Argentina. There’s one that involves a waitress seeking revenge against a member of the Mafia, another where a demolition engineer goes on a one-man crusade against parking fines and bureaucracy. There’s the road side clash between a big city slicker and his angry rural counterpart (which features one of the most creatively staged brawls I’ve seen in awhile), then the tale of the rich upper class attempting to subvert justice through the greedy application of funds. On paper, some of these ideas are nothing new but in the hands of Szifron, each short is a chance to gleefully explode the smiling veneer of “normal” society. The film as a whole has a reckless and brazen energy, and each short features a twist or two (or three) that will have you gasping and laughing in equal measure. The coordination of the film’s violence is brutal, merciless and hilarious. The final short film set at a fancy wedding would have had Luis Bunuel smiling. Wild Tales is not the kind of film that wins awards, but its comedy is both hard to create and even harder to sustain.

Here’s an interesting idea: imagine a message movie, one with a central hero who is stridently fighting against a gross injustice in the world. Now imagine that the story’s aim is true but the hero screws it up. The arc of the narrative will no longer hit the bullseye but the tale still yearns to be told. What then? With Tigers, director Danis Tanovic attempts to answer this question.

Tigers involves a Pakistani pharmaceutical salesman named Ayan (Emraan Hashmi) who, after talking his way into a position with one of the big multinationals, discovers he is selling baby formula products that are contributing to over a million infant deaths a year. While the success of his career has meant an escape from the very poverty and desperation that is ultimately killing these babies, Ayan is moved to fight back against the indifferent corporate agenda. But now I’ve buried the lede. What makes Tigers more interesting than your average David vs. Goliath yarn is that Ayan is telling his story to a group of filmmakers (including Danny Huston) looking to make a movie about his life. It’s a device we’ve seen before, but here it finds a clever purpose. The stand-in film crew are having trouble figuring out why Ayan’s story is not on the front page. Where is all the outrage? What Tanovic has done here is to steer into the skid of his own film’s hero making agenda. Ayan the character (and the man he is based on) is not perfect, and his decisions ultimately undo the effect but not the power of his narrative. At a time when “message” movies often find their edges softened to make their moral more palatable, kudos should be given when a film’s truth is delivered unvarnished. Tigers is one such film.

Nowadays so much of approaching a Ben Stiller movie depends on your tolerance of Ben Stiller. I personally loathe almost all of his blatantly commercial work (the Meet the Parents, Night at the Museum pablum). But, I know he is capable of funny, affecting work if he’s put in the right place. For his latest movie, While We’re Young he is back in the hands of writer/director Noah Baumbach who had previously guided him in the underrated Greenberg. This, to put it bluntly, is the right place for Stiller.

While We’re Young concerns itself with two very different New York couples. One, Josh and Cornelia (Stiller and Naomi Watts), are in their 40s and listing into the midlife years of a childless marriage. They appear outwardly happy, but are inwardly unfulfilled. The other, Jamie and Darby (Adam Driver and Amanda Seyfried) are ur-hipsters. They live in a messy loft covered with a pastiche of vintage objects, they own a chicken, and they go to events with names like “street beach party”. Nevertheless, Josh is smitten. He sees himself in Jamie’s drive to become a documentary filmmaker and seeks to join him in the spontaneous living of life on the edge. What Baumbach manages here is two-fold: he’s got the emotive surface story about a middle-aged couple grasping at impossible youth and dealing with the compromises inherent in growing up. And, he’s got a nested philosophical treatise on the culture of technology, sharing and permissiveness that has cleaved two generations apart. While We’re Young  is positioned as a barbarians at the gate type of film. Except Stiller’s Josh, in strokes both manic and finely drawn, wants to be a conquering barbarian. We laugh when he wears a ill-fitting hat, or when he pulls a muscle. But Stiller’s rare quality is to make us care when the wheels start coming off. Baumbach knows how to take him there and his film manages a coherent point to save the village.

The initial thought on reading the synopsis for ‘71 starts with “another movie about the Troubles?” While the time period and location is rich in storytelling potential, in many ways it feels like that era of 70s Ireland has been covered in just about every way it can be. Director Yann Demange‘s take on the subject matter reads as far less broadly political and instead burrows deeply into the kind of personal struggle that an audience can identify with regardless of context.

The film introduces us to Gary Hook (stolid incoming star Jack O’Connell), a British soldier looking to see the world. Instead, he is informed that he’ll be sent to Belfast to help police a rapidly deteriorating situation. The opening sequences of the film are the most impressive. Demange choreographs an impressive, gritty riot that sees Hook getting separated from the rest of his unit during the mayhem. The film finds strength in this isolated perspective as O’Connell’s presence is one as hard and definable as the brick row houses he skirts around. It is only in the middle section, as we get slightly bogged down in clan politics and deal making, when ’71 loses steam before building to an effectively gripping climax. Still, between the bookending scenes of kinetic mayhem, the film highlights its real feelings on this particular brand of war and terror: for many it was and is just a means of keeping power. As someone remarks to Hook, he’s just a piece of “meat.” The dishearteningly large amount thrown into the churn is no longer important, so long as there is more coming. 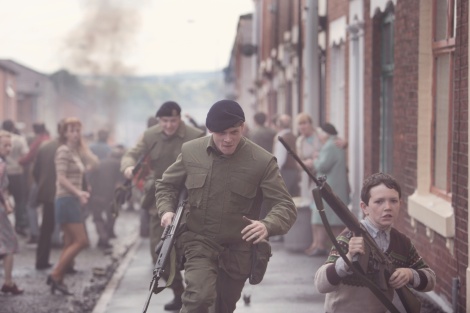 Jihad, as director Abderrahmane Sissako would have it, is the very essence of overkill. His film Timbuktu makes this clear from the opening shot as a jeep full of young men armed with assault rifles shoot madly at one fleeing animal. They hope to tire it out, and failing that try for some target practice on delicate wooden sculptures sticking out of the sand. For all the film’s general subtlety, Sissako’s thesis is clear: this way of thinking is poisonous and needlessly destructive. Timbuktu generally centres on the life of one family in the Malian desert. The father owns cattle, the wife takes care of their daughter. They are more isolated now in their tent, as the winds of change have brought in militants and blown away their neighbours. Anger and mistrust appears to seethe from between the village’s buildings out into the wilderness. One of the father’s cattle is killed, he reacts angrily and the malignancy spreads.

Sissako uses this modest hook to steer his film, but it drifts from this story to others; to a fisherman, to the town’s witch doctor of sorts, around the various militant and religious figures. The only constant is the din of unreasonableness that is delivered via the Jihadist logic. In the process we see images of both beauty and absurdity as when we witness some youths gracefully playing soccer without a ball. Or a musical interlude broken up by marauding officers. Timbuktu’s narrative remains diffuse enough to make it hard to recommend. In a way, it is the kind of film that TIFF truly exists to serve. It appears beamed in from another planet wholly apart from our own experiences. We have only our basic humanity to guide us. This is why the ending, abrupt as it is, remains heartbreaking: a reflection of those opening overkill images of frustrated men shooting at something – anything – beautiful.

Edward Zwick and Steven Knight would like to have things both ways. Their new film Pawn Sacrifice, which Zwick directed and Knight wrote, wants to be both a celebration of a strange strand of rah-rah American-ism and a look into the mind of the most brilliant and troubled chess player of all time, Bobby Fischer. As a result, the film lurches between some almost appalling lazy montages of historic moments, talk show clips and people waving flags, to scenes of Tobey Maguire as Fischer yelling his head off as he retreats into paranoid isolation. The effect is jarring to say the least.

Despite this, Pawn Sacrifice almost succeeds despite itself. Like many of Zwick’s films (Glory, The Last Samurai), he’s working with material that lends itself well to the cinematic treatment . (Yes, Zwick manages to find ways to make chess visually exciting to watch.) We’re shown early obstacles to overcome – in this case, unresolved mommy issues, an obsessed mind that brims with entitlement and an understandable need to gain recognition. By the time Maguire appears in the film, his Fischer is already one of the more renowned chess masters in the world. He’s gunning for the championship held by the opaque and mutely charismatic Boris Spassky (played pitch perfectly by Liev Schreiber). Along the way Michael Stuhlbarg, as a patriot-minded handler, and Peter Sarsgaard, as the literal moral voice of the film (he plays a priest), join Maguire as he bullies his way to the top. It is hard not to feel roused by it all, but too much feels out of place. The cacophony of Fischer’s obvious mental illness, and the role his team have in enabling it, bumps up against his triumphant climb up the world chess ranks. Meanwhile, the politics of the Cold War fall into simple black and white abstractions, and the most effective images are the ones tacked onto the end during the epilogue. Here we see images and hear the voice of the real Bobby Fischer, a man far too troubled, complicated and brilliant to be captured by Zwick’s camera.