The Toronto Raptors are quickly becoming a popular choice as a dark horse to make noise in the playoffs during the upcoming NBA season. I personally feel these type of lofty expectations can be the kiss of death. My personal reservations notwithstanding, it’s undoubtedly an exciting time to be a Raptors fan.

After ESPN’s Summer Forecast picked the Raptors to finish 5th in a murky Eastern Conference, vitriol flowed less quietly. Many fans – Raptors supporters or not – seem to feel the team deserves more respect, especially considering it went 41-23 following the trade of Rudy Gay to Sacramento. With the elite competition seemingly destined to go through growing pains (Cleveland, Miami), banking on an injury-prone superstar (Chicago) or decimated by an injury to their cornerstone player (Indiana), both the Raptors and Washington Wizards are being looked at as consistent young teams with some playoff experience under their belt, possibly poised to make a jump to the next level.

A big piece of the teams current success has been attributed to General Manager Masai Ujiri and rightfully so. He’s had a promising off-season, re-signing key pieces in Greivis Vasquez and Patrick Patterson, and adding bench depth by bringing in Lou Williams, James Johnson, Greg (Cleveland) Stiemsma and Lucas (Bebe) Nogueira and generally doing everything required of the most badass GM in the NBA.

But let’s not forget, about 7 or 8 years ago, we were hailing a man named Bryan Colangelo with the same levels of praise. After the 2006-07 division title, we basked in Chris Bosh’s emergence as an elite power forward and Sam Mitchell’s Coach of the Year award. We the fans were gaga. We were pumped up. We hailed Colangelo’s quick turnaround of a moribund franchise that was bathing in the after-grease of the Rob Babcock era.

Bryan Colangelo, that same saviour, was eventually run out of town on a rail. And rightfully so. 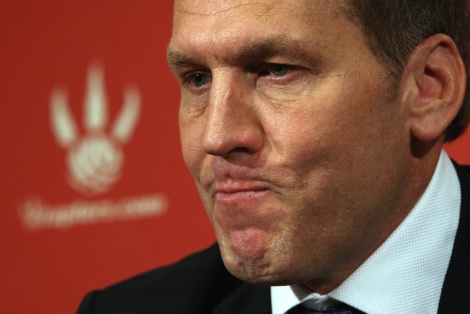 I’ve documented my feelings on Colangelo before in this very space. He’s a great fixer, not such a great manager. He’s better at the business side of things than the basketball side of things. He’s fiercely loyal to his own players to the point that he’s (somewhat unfairly, it turns out) notorious for giving undeserved contract extensions to players he deems to be ‘finds’.

However, when we look at the current Raptors team, we see a starting five comprised of moves made solely by Colangelo.  At one time or another, each of these moves was heavily scrutinized, if not completely panned by both the fan base and the media.

Don’t believe me? Let’s have a look!

Colangelo was ripped at the time of the Lowry trade, though it had little to do with Lowry himself. After giving out the now notorious Landry Fields deal in an effort to ‘guide’ Steve Nash to Toronto, Lowry was Colangelo’s emergency plan B once Nash spurned Toronto for the Lakers. He gave up a first round draft pick to land a player that was deemed ‘difficult to coach’, ‘overly competitive’ and, no quotations necessary, kind of chubby. While there was hope Lowry could continue to improve following a solid season in Houston, few thought he would become the kind of cornerstone he has for the Raptors. I mean, what a coach killer, am I right?

DeRozan was a raw athletic talent when Colangelo selected him with the 9th pick of the 2009 draft. Many viewed him as a player that could have benefited hugely from spending another year at USC and maybe that was true. People whispered about DeRozan as a potential bust, and it was said in many corners that Gerald Henderson or Terrence Williams would have been a better fit for the defensively challenged Raptors. When Colangelo signed him to a four year, 38 million dollar contract extension in 2012 (that has now made him one of the NBA’s best bargains), the move was again criticized by many. The Raptors were ‘bidding against themselves’ and ‘signing a one dimensional scorer’. DeRozan’s continued improvement has put that talk to rest. He has proven to be a true gym rat, improving every single one of his counting stats on a yearly basis and emerging as a co-leader of this team in a post Rudy Gay/Chris Bosh world. DeRozan isn’t the vocal backbone of the team, but he is the one who leads by example. His appearance on Team USA this summer followed his first selection to the NBA All-Star team, making him only the fifth All-Star from that 2009 draft. Oh yeah and he’s still only 25. What a bust!

The reaction to the Ross pick seems to be forgotten but it was a head-scratcher for Raptors fans when he was selected 8th overall in 2011. Some will still lament the fact that they passed over Andre Drummond, but so did eight other teams. They also had a young centre waiting in the wings – one that can actually shoot free throws. In a draft where Austin Rivers and Jeremy Lamb were rumoured to be possibly heading to the Raptors, coming away with Ross, his defense and streaky shooting ability in tow, was a coup for a team with playoff aspirations. Still just 23, Ross is another young player who gives the team athleticism on the perimeter. He also did this. What’s that Jay Bilas? Speak into my good ear.

When Colangelo procured Johnson and Sonny Weems from the Milwaukee Bucks before the 2009 season, Amir was an afterthought, a depth piece. When Colangelo rewarded his progress with a 5 year, 34 million dollar contract in 2010, naysayers howled at the moon. It was painted as a panic move in the wake of Chris Bosh’s free agent defection to Miami. A massive overpay for a player with limited upside. All Johnson has done in the wake of the criticism is play hurt, smart and tough, giving the team a consistent presence down low, allowing the next guy on this list to grow. Now, with Johnson’s free agency looming yet again, he seems almost underpaid or at the very least, like he’s worth every penny.

This is the selection I remember receiving the most hate from my fellow Raptors fans. Colangelo took Jonas 5th overall in the 2011 NBA draft, knowing full well that he would have to spend at least one more year playing for his professional team in Lithuania. Two years removed from the playoffs, the honeymoon of being the ‘saviour’ in Toronto was over for Colangelo. Fans were restless – the plan to keep Chris Bosh hadn’t worked and the team was a shambles. The spectre of Andrea Bargnani hung over the idea of drafting an international player. Still, Colangelo didn’t budge on his instincts and thank goodness. Jonas has improved steadily in his two years in the league and is looking like a force to be reckoned with playing for Lithuania this summer. Blessed with great hands, as he develops his 18 foot jump shot and gains strength, the man I call JV-Nasty (please help me get it to catch on!) is beginning to show why many thought he would have been selected first by Cleveland over Kyrie Irving if he’d been able to come to the NBA directly. Regardless, with players like Jan Vesely and Bismack Biyombo going immediately behind him, it’s clear Colangelo made the right pick.

Look, I’m not here to host a love in for Bryan Colangelo. The guy signed Landry Fields to his current disaster of a contract, he drafted Andrea Bargnani 1st overall, he traded for Jermaine O’Neal and he even brought that goddamned tire fire of a Marcus Banks contract to Toronto after just barely escaping it in Phoenix. Most importantly, he played chicken with Chris Bosh instead of pulling the trigger on a deal that would have netted some kind of return for the most accomplished player in franchise history. He wore out his welcome and he needed to be replaced.

With all that said, it’s interesting to see his fingerprints all over the core of a team that’s poised to be a legit contender in the East. Did he see things in these players that other people missed? Or did he just get lucky?

Without Bryan Colangelo, who knows where this team would be?

I have to say, not something I thought I would have said two years ago.

One response to “The Echoes of Bryan Colangelo”