The following is a fake article I’ve been meaning to write for years but couldn’t because I had Procrastinitis (a disease similar to ebola except instead of getting the worst hemorrhagic fever of your life you just don’t feel like doing anything productive).

Pretend this is two years ago. Pound the rock Dwane Casey is the head coach, Euro lover Bryan Colangelo is the General Manager and Andrea Bargnani is the “star” of the Toronto Raptors.

This week in restaurant reviews we went to a downtown Toronto restaurant named Stegosaurus. Stegosaurus opened in 1995 but since 2006 they have been serving a controversial type of pasta. Instead of the typical favourites spaghetti and linguini, Stegosaurus has been serving Bargnani Pasta.

We sat down with head chef Wayne Casey and asked what made Bargnani Pasta different from the other pastas out there. 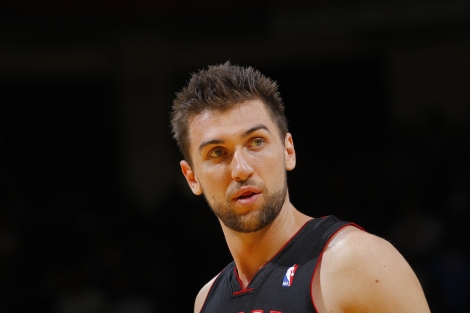 Chef Casey: “Bargnani pasta is a long thin noodle made from all white flour and the eggs of an Italian dodo bird”

And what’s the difference between regular chicken eggs and Italian dodo bird eggs?

Chef Casey: “Chickens have an instinct to always try to get out of their pen. They will repeatedly try to jump over the fence. In ornithology this yearning for freedom, this yearning to get past the fence is called “de-fencing”. Italian dodos on the other hand rarely try to get out of their pen, they rarely “de-fence”. Chickens will even help each other get out, one chicken will stand on another, and they help each other “de-fence”. The Italian dodo never helps “de-fence”. This somehow makes the Italian dodo eggs softer and when combined with all white flour makes Bargnani pasta very soft.”

And what kind of food is best paired with Bargnani Pasta?

Chef Casey: “Bargnani pasta just isn’t strong enough to control a meal by itself. You have to serve Bargnani pasta with big pieces of dark meat. The bigger the better. If I could pair Bargnani with ostrich leg I would. But ostrich is expensive and hard to find. I end up making do with what I have, sometimes turkey leg or vulture thigh”.

Is it true that there is $20 million worth of Bargnani still in the back?

Chef Casey: “Yeah, it’s true. But that investment was the decision of our restaurant manager. I’m just working with what I inherited. Personally I wouldn’t have selected Bargnani pasta from the 2006 Farmers Market. I’m just not a big fan of European food. I much prefer locally grown American food. If it was my decision I would have selected Lamarcus Alldressed Sauce. It’s a big strong sauce that satisfies a lot of the nutritional requirements of a healthy meal. A restaurant in Portland selected it. They haven’t turned into a 3 star Michelin but they serve damn good food night in and night out. Don’t print that.”

We thanked Chef Casey and went to speak with General Restaurant Manager Ryan Colanjello. We asked him what his vision for Stegosaurus was:

GRM Colanjello: “When I left my father’s restaurant in Phoenix I wanted to bring my culinary expertise to Toronto. My vision is simple; infuse traditional western dishes with European flavour. I’m a big fan of Spanish tapas, Turkish pizza, Slovenian soups and obviously Italian pastas.”

Can you tell us about the first time you tasted Bargnani Pasta?

GRM Colenjello: “That’s a funny story. When I heard about Bagnani Pasta I flew straight to Italy. The first time I put Bargnani in my mouth I was too excited and I ended up with Bargnani sauce all over my face and Armani suit. But you know what, Bargnani’s taste and texture and smell… it all just felt right.”

And how do customers feel about Stegosaurus and Bargnani Pasta?

GRM Colanjello: “Our restaurant is nearly full every night. People keep coming year after year. I assume our customers have the same love of European food that I have otherwise why would they keep coming back. Feel free to ask them yourself.”

We sat down at a table with some patrons to get their impression of Stegosaurus and the Bargnani Pasta. Here are some of their comments:

Customer 1: “You know what I find weird? They plate the meal with the Bargnani pasta around the outside of the plate. Shouldn’t the pasta be in the centre?”

Customer 2: “Stegosaurus is a weird name for a Toronto restaurant.”

Customer 3: “The table next to us refused to tip because they thought the pasta sucked and the meat was undercooked. I think their expectations were too high. Overall the food isn’t that bad, a little overpriced but that’s downtown Toronto for you.”

So what’s next for Stegosaurus, Casey, Colanjello and Bargnani pasta? In this critic’s opinion, Stegosaurus needs to find some giant restaurant to dump their oversupply of Bargnani Pasta on, it’s clearly not working. They should also explore new ingredients from the barely tapped Farmers Markets in South America to add some extra spice to the menu.

Next week we check out another downtown Toronto restaurant, the Maple Oaks. They are one of the most expensive restaurants in North America. We’ll sample the Vietnamese / French dish Pho-neuf which is Pho noodles at nine times the normal price.