All credit for the title musing goes to Tim Micallef of Sportsnet. I’ve seen it elsewhere on Twitter since, but I heard it from him first.

Yesterday afternoon Tim Micallef, Sid Seixeiro and DJ Bennett engaged in a discussion regarding the recent blow-up between Bill Simmons of Grantland (an ESPN subsidiary) and Mike and Mike of ESPN radio.

A quick summary of the situation, for those who are unfamiliar:

Simmons recently appeared on the Colin Cowherd show, on ESPN Radio. While on the show, Cowherd asked Simmons about the Cavaliers slow start. Simmons, in typical Simmons fashion, responded with a ‘feeling’. The following is a quote followed by a semi-paraphrased statement, since I can only find weirdly edited versions of the transcript.

Simmons: “Anyone who thinks LeBron looks the same is fooling themselves,” he said. “He doesn’t have the same impulsiveness. He looks 20 pounds lighter physically. Just his general force-of-natureness capacity — whatever you want to say — it’s not there … This is not a jump-to-conclusion thing. I have been watching this Cavs team since the preseason games started, and he does not look the same.”

Simmons: The situation reminds me a tiny bit of Pujols going to the Angels. They thought they were getting this player who had been amazing before he got there and he was never the same. This feels like it might be the same thing. It’s really early to say this, so please, sports blogs and people, don’t throw this in my face.

Now even though that’s paraphrased, I know for a fact that he included the caveat about it being really early because Tim and Sid played it on the air, while I was listening personally. Later on the same show, Cowherd asked about the Cavs trading Dion Waiters and Simmons responded again by saying it was too early and that they need to see the team play for at least 20 games before pulling the trigger on anything major.

The controversy came on Thursday when ESPN’s ‘Mike and Mike’, played the above quote… but cut out the caveat. They played the clip like it was a statement of fact. They made it sound like Simmons was dissing LeBron and the Cavs, when really all he was doing was having a conversation about potential outcomes of the scenario. They made it sound like he was speaking in absolutes, as opposed to spitballing possibilities. They panned the statement, calling it ridiculous. They also implied that this was just Simmons chasing headlines. This is a show on the same network as Cowherd’s show, that is under the same umbrella as Simmons’ Grantland. It caused a stir, to say the least.

Simmons fired back on Twitter, voraciously. You can view the tweets here.

Essentially, he said the context in which the clip was played was bush league, that Mike and Mike should have the balls to have him on the show to ask him about it and that he hadn’t lost any respect for the show, because he never had any to begin with. Shots fired! But really, just truth fired, because I completely agree.

That gets us back to Tim, Sid and DJ. They bandied back and forth the comments above and talked about which side was justified, not really making a firm statement but seemingly leaning towards Simmons. They did call out Mike and Mike for taking the quote completely out of context. Towards the conclusion of the broadcast, Seixeiro openly wondered what Simmons endgame was.

All of this led to Tim Micallef ending the show with the question:

‘Is Bill Simmons just George Costanza trying to get fired by the Yankees?’

The evidence is piling up.

If you’re a sports fan, you’re familiar with Simmons recent suspension by ESPN. He was suspended without pay for three weeks for making statements on his popular podcast about NFL Commissioner Roger Goodell. You can view the comments here.

During his time off, Simmons tweeted pictures of himself golfing and getting a mani-pedi. The message was simple. ‘No flies on me’. Upon his return, he thanked readers and listeners for their support, of which he received a monumental amount.

Deadspin ran an article while the suspension was going on. It goes into full detail about Simmons’ ongoing battles with his ESPN bosses.

You can see this near the end of the article, but while he was suspended friend John O’Connell, known to podcast listeners as ‘Jack-o’, tweeted a response to ESPN saying they were under the impression Simmons was hoping to remain with ESPN.

‘I’ve known Bill since we were 18 years old. That is the funniest thing anyone has ever written about him’.

And you can feel it. You can hear it in his voice if you listen to his podcast regularly. There is frustration. There are barbs. There are comments which he might have shied away from before in the interest of keeping the peace. Simmons has always been opinionated and irreverent but before Grantland he needed ESPN to have the size of platform to which he had grown accustomed. It’s getting to the point now where Simmons might be bigger than the company that cultivated him. Or, as it may be, allowed him to cultivate himself.

In his final tweet to Mike and Mike, Simmons linked to an article that ESPN ombudsman Robert Libsyte wrote after he was suspended. In it, Lipsyte concludes that ‘it’s time everyone involved — Simmons, ESPN and the audience — evolves’. Simmons may have been pointing out the irony of an ESPN radio show then slandering/attacking him in the same way he slandered Goodell, but the offense doesn’t exactly compute. It sounded more to me like another excuse to fire a shot at ESPN, from an employee who wishes he wasn’t one any longer.

I get why this whole situation rankles for Simmons, regardless of the suspension and other recent events. He’s ESPN’s most popular personality, bar none. And this is like a broken record – in 2009, Simmons was vilified by an ESPN Boston affiliate as their ‘Fraud of the Week’. He expected ESPN to back him up. They didn’t. Now it’s five years later, Simmons star is bigger than it ever has been and another ESPN entity is attacking him, on company time. And around and around we go. Where will it stop? Nobody knows! But if Simmons doesn’t pull some punches soon, he might wind up living the unemployed Costanza dream.

But then again, maybe that’s his plan.

GEORGE: (inhales deeply) I tell you, Jerry, I’m feeling something. Something I haven’t felt in a long time.

GEORGE: I wanna go to a tractor pull.

GEORGE: I am staying out all night!

GEORGE: I wanna bite into a big hunk of cheese, just bite into it like it’s an apple. 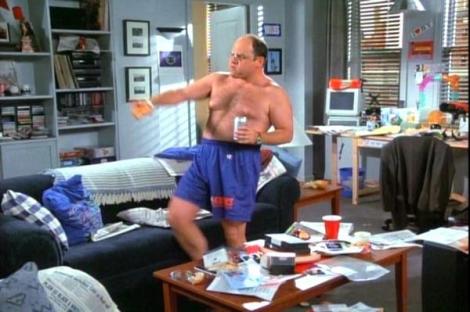 A block of cheese the size of a car battery!