To trace the arc of Christopher Nolan‘s career you’d have to start with a modest protractor before busting out some variation of Foucault’s pendulum. It’s impossible to think about Nolan’s new film Interstellar without contemplating all that time and effort it has taken him to get from there to here; to navigate the Hollywood star system and push his dreams into increasingly vast spaces. Everything about this film feels bigger than seems possible – the dialogue, the visuals, the cast, the ideas, the emotions. It feels hyperbolic to say this, but that doesn’t make it untrue: for better or worse, Nolan is the only person on earth currently capable of making a film like Interstellar. 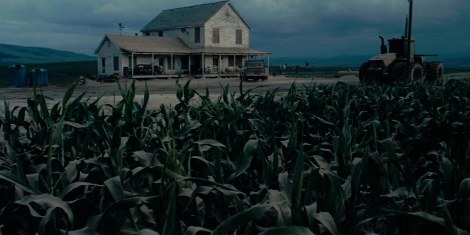 Interstellar starts in a familiar place.

The majority of Nolan’s non-Batman films – the ones you’d deem his most personal – have a certain inborn cynicism. His breakout film Memento deals with the crushing idea of perception and wilful self-deception. Insomnia has a hero that is as broken and morally conflicted as its villain. The Prestige dances around the idea of love and sacrifice, but asks us to invest in a protagonist whose ambition eventually twists him into evil. And Inception, for all its hopeful notes of reunion, ultimately circles back to that same theme of self-deception that Memento trades in. As dark as the Batman trilogy got, at least the hero in those films saves the day.

In Interstellar, our hero Cooper (Matthew McConaughey) is a good man. He works a farm as the widowed dad of two children, Murph and Tom (Mackenzie Foy and Timothée Chalamet). He keeps an eye on his father-in-law Donald (John Lithgow) and looks to the sky over his corn fields in pure wonder. He’s also an esteemed pilot and talented engineer. Cooper is a far cry from the doomed and obsessed protagonists of Nolan’s previous films (including Batman). But unfortunately, Cooper’s world is dying. There are heavy dust storms that drive everyone inside, and blight that wipes out crops; vague references are made to larger catastrophic events (though bottled beverages are always on-hand for Cooper to solemnly sip). It is unclear how much of humanity is left, but Cooper is chided that his world needs farmers now far more than pilots or engineers. Then again, this film is called Interstellar; we know it won’t stay earthbound for long.

Along with his screenwriting partner and brother Jonathan, Nolan lumbers through this opening expository act as carefully as he can. While the brothers have dabbled before in expressing the relationship between parents and children, Interstellar is their first film to be centrally built upon the conceit. As such, the weight of the film’s early scenes feels heavier than gravity. If you criticized Gravity for its admittedly wan narrative, take heart, Interstellar never misses an opportunity to remind the audience of its emotional gravitas. We are urged time and again to feel the bond between Cooper and his young children, particularly his daughter Murph. But the family has a strange way of talking; all of their words are loaded with a hard-coded portent. And, as cool as McConaughey can be, nobody really jokes and the schmaltz is layered thicker than crop dust. The film’s intrigue achieves lift off once the second element of narrative is set in place: space and a new frontier. This is where Nolan, in spite of all that expository legwork, is at his best.

To launch a ship into space, though, we need more characters. So, here comes Professor Brand (Michael Caine, looking comfortable in his sixth Nolan collaboration) to explain the plan with a gleam in his eye. His daughter Amelia (Anne Hathaway, with her best Bullock hair cut) arrives as the first in line to execute it. Then, there’s Doyle (Wes Bentley, intensely strait-laced) and Romilly (David Gyasi, humourously strait-laced) to fill out the mission crew. And to continue the long line of sassy robots, TARS (Bill Irwin) tags along too. Cooper is presented with a choice that is not really a choice: lead the mission to find a new planet for humanity, but risk never seeing your daughter again. Even with all of Nolan’s world building, his evocations of a world in collapse, his expansive technological imagination, the emotive personal stakes involved for all, and a run time that takes awhile to put this all together – phew – this is standard science fiction stuff.

But then Interstellar leaves earth and becomes something else entirely. 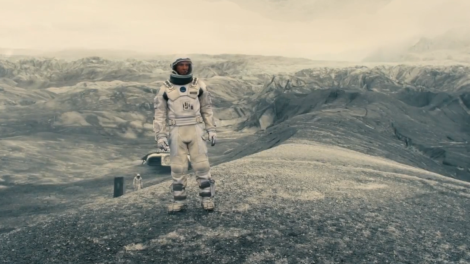 Before it ventures into a very different place.

The most memorable moments of Nolan’s films are visual. Think of the recursive memories of Leonard in Memento, or David Bowie as Nikola Tesla wandering under a sparking AC current; remember dream warrior Dom watching the demise of the illusory world he’d constructed, or Batman’s fire-rimmed bat-signal. It is easy to criticize Nolan’s intent, or the hollow lack thereof, with some of these images. And yet, he did make them happen.

Working with cinematographer Hoyte Van Hoytema, Nolan portrays the space of Interstellar as a contrast. The black hole into which the astronauts venture is somehow both black and vibrant. Like Stanley Kubrick, to whom all modern sci-fi films are indebted, Nolan makes sure to capture the vastness of space, the scale of its celestial bodies, and the minuscule presence of humans in comparison. Coupled with Hans Zimmer‘s symphonic score (another nod to Kubrick), this universe positively sings. After the dusty cornfields of Cooper’s Anytown, USA, this is where we go. In and of itself, Nolan’s exploration of these outer limits makes Interstellar worthwhile.

Unlike Kubrick’s 2001: A Space Odyssey however, Interstellar tethers its second half firmly to the actors so as to save itself from getting lost (in space). Though these astronauts cover great distances, the film’s power comes from the translation of time on screen. We’re told the hours the crew spends in space multiply into years for those on earth; a mistake can cost decades. Never mind how accurate the astrophysics or relativity theory is – we understand the pain felt by Cooper as he gets transmissions from his rapidly aging children (with older versions played by Jessica Chastain and Casey Affleck). McConaughey transmutes this sadness, and splices it together with his innate unflappability, to continue his run as a strong leading man. He’s naturally charming, of course, but he sounds just smart enough to be placed in the cockpit of a spaceship. We believe he’d make a great space cowboy.

For her part, Hathaway ably jousts with the script. She’s given a lot of exposition to spout, and has to sell the idea of love as the most powerful connection in the universe; her Amelia is a tough lady. Bentley and Gyasi are given less to do – though the latter, with his strange flat way of speaking, makes an impression as a lonely scientist. And Irwin, as the voice of TARS, a combination R2D2/C3PO, creates a memorable sidekick. The big name Hollywood star who shows up (don’t IMDB it!) adds a texture to the film – in familiar and new ways – allowing Nolan a chance to show off his skill for spectacle. It goes without saying that these characters are put in positions of peril, that they must overcome seemingly insurmountable odds on the surfaces of unknown worlds and amongst a strange solar system. As Nolan’s career reflects, the journey from here to there, through time and space, is not easy. 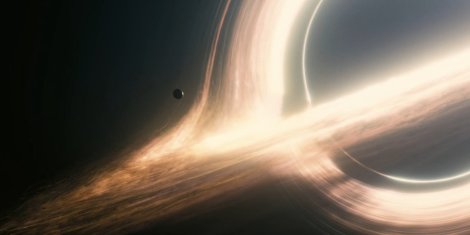 And then it goes waaaay out.

This is where Interstellar does something extraordinary with all of its gravity, and where Nolan breaks ground on something new. As the budgets of Nolan’s films have grown, so to has his freedom to explore these expansive interior (as in Inception) or exterior spaces (as seen here). Very few directors are even allowed to reach for this scope of film making, let alone attempt it. Interstellar is overwrought, but as it builds to its multi-layered climax, we are presented with everything all at once in a completely singular way. It’s the bold combination of elements: the simple father-daughter bonding, the intergalatic exploration, the world saving stakes, the time-bending contemplations – all of which slingshot the film back through our inborn cynicism with the force of a supernova. There is clear-eyed heroism here and a distinct desire to believe in humanity’s ability to achieve. Nolan has four children of his own and in many ways this film feels like the most personal of his “personal” films. To enjoy it becomes a choice that is not really a choice.