I’ve only just started getting into comics really. When I was a kid my local convenience store didn’t carry any so I had to spend my hard-earned cash on Nerds and 3 Musketeers instead. Comics would come from my Dad; whenever he would come across them or remember to, he would buy a couple and bring them home for us kids. At first I got a mix of Marvel and DC, but pretty quickly the field narrowed to Batman. Just Batman. Marvel comics seemed too bright and a tad bit hokey for me. But really, because of the inconsistency with which I received them, I never really paid that much attention. I was certainly not aware of what we now call “events” of the era.

It wasn’t until Grade 7, when I had transferred to a new school, met some different people, and had an income of my own (as a proud newspaper boy), that I really immersed myself in the comic world. But by the time I’d discovered Silver Snail and The Beguiling, my friends were into Akira, Beanworld, Cerebus, not the regular superhero stuff. They were bored of that now, having spent so much time with it in their younger days. So that’s what I explored. Then High School came and I got into other things altogether and my comics gathered dust.

The other day I was down in my storage space moving some stuff around and found some boxes of comics that were given to me by a friend who was sick and dying. Sadly, he didn’t last too long, and once he was gone, I didn’t really want to read them. I didn’t want the reminder of how I got them in the first place. He gave them to me because he knew I’d appreciate them, but for a long while they were just too heavy for me. So when I found them, and a bunch of boxes of my own, I pulled them all out and brought them up to my living room. All of a sudden, I had a helluva lot of comics. His were mainly from the late 90s and early 2000s; mine were mainly from the late 70s and early 80s. I had four decades of comics to pour over. And so I did. 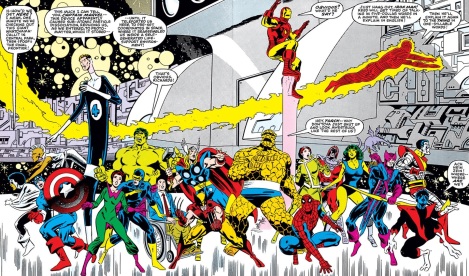 There’s a LOT to take in here. Re: Marvel’s Secret Wars.

Somewhere in the boxes I found the first three issues of Marvel’s Secret Wars from the mid-80s. It was one of the first big crossover events. Marvel piled all their superheroes together and all their super villains and then they let the fun fly. I remembered reading these when I was younger. It was a 12 issue mini-series, and the issues we didn’t have were readily available when I was a kid. All of them except one. See, during the early 90s, comics were experiencing a bit of a boom. It was just like the Tulip Bubble of 1637. I remember seeing single issues of early Spawn (8, 9, especially issue 10 with the Cerebus crossover) going for hundreds of dollars. This was when Spawn was still in the teens, so these issues were only a few months old! It was all speculation: the assumption that these early issues might, in the future, command the same kind of money that early issues of Action Comics, Astonishing Tales and Detective Comics do now. The only difference is that by the 1990s, comics weren’t being treated like trash. See, it’s scarcity that makes them valuable, and the zillions of Spawn #10 means that it wouldn’t ever be scarce. In the 30s, 40s, and 50s, people treated comics the way we treat newspapers: they were great for throwing under some kindling to get the BBQ going. My father used to light his comics and baseball cards on fire to melt his army men (after they were captured of course): this is how they were treated back then.

So there I was in the 90s in the middle of a speculative comic book bubble. Me, an 11 year old with very little disposable income. But comics were never about the value for me, they were always about the story. So I never bought the other Secret Wars issues. That one issue, that was what kept me from it. It was all because of No. 8. Secret Wars #8 was the first appearance of Spider-Man’s infamous black costume. The costume that would go on to take over Eddie Brock and turn him into Venom. Back when I was a kid, it was going for close to $500 if it was in mint condition. Despite the fact that the other issues were all priced within my reach, I wouldn’t pick them up, because I wanted to read the story. The whole story.

Now the comic market has regulated itself and everybody recognizes that comics ain’t worth shit. After digging through my boxes, I went out and picked up the rest of the Secret Wars. All of ‘em. I went up to my Uncle’s cottage for a week, sat on the dock when it was sunny, and inside when it was rainy, and I read them. And it was great. The newsprint pages, the ads for Olympic Sales and Charles Atlas. It really reminded me of being a kid. Being in my room, laying on the carpet (in the 70s and 80s it was cool to have wall-to-wall carpeting; hardwood be damned!), and spending hours reading and re-reading my Batman comics. It made me want to get that feeling again. So I started buying more comics. 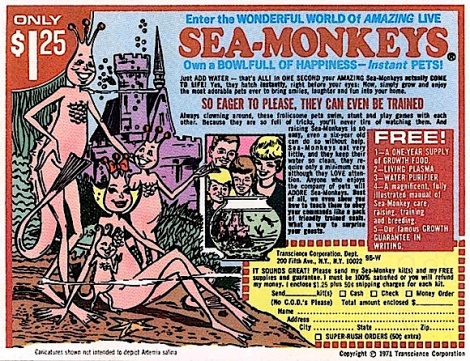 I started with the old Marvel storylines I’d missed out on. I’d buy collections of them because it was easier and cheaper than searching for the individual issues. I was blown away by the early Spider-Man comics. I’d never gone back and read the original runs from the 60s, but now I understood why Stan Lee was such a genius. The stories were, and remain, totally engaging. I felt myself being enveloped by that world and everything else just dropped away while I was reading. I also bought 1001 Comics You Must Read Before You Die and started picking up a few of the ones that peaked my interest. These tended to be more of the “graphic novel” variety, with loads of realistic violence, politics, life, issues, exactly the opposite of what Marvel and DC were about. But that’s fine. The medium has room for all different forms of expression.

Eventually I started going back to comic book stores. Mainly to pick up backsides and collections. Catching up on all that I’d missed over the last few decades. I’m not plugged into the scene. I don’t know what’s getting all the buzz; what the most anticipated releases are and the like. And frankly, I didn’t think that new comics would hold me like the old ones would. But when I’m in the comic book stores, I sometimes eavesdrop on the customers and the dudes behind the counter. A couple months ago I was in there and some guy came in to pick up his comics from his pull list. Apparently comic book stores will allow you to sign up for a service where they take all the comics you want to buy on a regular basis and put them aside for you so you can pick them all up at once (one might be a biweekly, the other a weekly, and a monthly). Makes things easier. So they were talking about this comic the guy was excited to get. The comic book store guy mentioned that he was lucky to have pre-ordered it because it sold out the day it came in. They discussed how it was oversized and the problems that might come from that. They discussed it’s film-noir influence and how well the artist captured that. They mentioned Ed Brubaker, who I knew wrote a bunch of recent Captain America stuff and gave us the Winter Soldier. But they didn’t mention the name. So I pulled out my phone and Googled it.

Brubaker just started a new series called The Fade Out, a Hollywood murder-mystery set in the late 40s/early50s. We’re now three issues in, and I’m pretty happy with it. At first I thought it was going to be fairly cliché. He uses the standard LA Noir tropes: a dead starlet, powerful moguls, corrupt cops, etc. So how good could it be? The answer is: pretty damn good. Somehow Brubaker seems to make it work without becoming a tired L.A. Confidential rehash. Sean Phillips’ art is beautiful. He’s good at recreating that feeling you get from reading a Raymond Chandler novel or watching Chinatown.

We start off with a drunk screenwriter waking up in a motel bathtub. He wanders into the other room and finds a dead actress. Then he goes on to try and put the pieces of the puzzle together. Pretty simple, actually, but again, Brubaker and Phillips effortlessly rope the reader into the mystery. Normally I’d say wait for the trade paperback when it comes to multi-issue arcs (seems comics and TV have both shucked off the episodic-cowl that made them who they are), but The Fade Out has some interesting extras going for it in the single-issues: the team have recruited some Hollywood experts to write essays about the olden days and they’re filling the backpages of the books with these. Apparently, they won’t be reprinted for any of the trades. They’re just as intriguing as the story itself.

So here I am, 20 years later, still reading Marvel Secret Wars, and finding that comics are still a great place to find a great story.