There are generally two schools of thought when it comes to universe construction: the seven day method and the Big Bang. The former defines itself as a thoughtful process with a note of fantastical whimsy. The latter works–but damn if it isn’t loud and messy.

After this year’s San Diego Comic Con, DC Comics made clear it favours the Big Bang. They recently revealed two film trailers, one each for Batman v. Superman: Dawn of Justice and Suicide Squad, to explode the idea of a shared DC film universe into the minds of the general public. The films are set for release in March and August of 2016, respectively, and together represent DC’s first tangible attempt to achieve this end. The reason for this new direction is obvious. DC just spent much of the last decade losing ground to their rival, Marvel Comics. 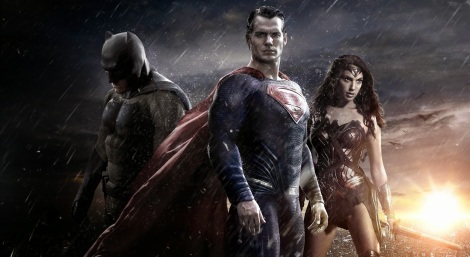 DC’s best hope against their rivals at Marvel.

These days Marvel’s success as a film studio appears as a mere formality. They announce a movie and sometime later hordes of people around the world dutifully pay to see it. Since 2008’s Iron Man, each new Marvel film now builds on the success of the one before it while buttressing the creative scaffold for the next. Marvel’s eventual decision to make films this way should not come as a surprise. Their shared comic universe was, at least in some small part, the source of the company’s original success in the 1960s.

The principles of Marvel’s shared universe are simple to explain and intrinsic to the nature of many comic books, including DC’s. First, explain who these characters are, and second, outline how they relate to each other. In this way, comics can engender an investment of emotion over time from the reader and entice an audience to come back for more as events fold outwards. That this idea marries well with a modern film studio’s desire for financial certainty and repeatable success over time feels obvious. We’re seven years into a process which Marvel has declared will carry them into 2019 (and presumably beyond). There’s an implicit trust at work here–they’ve established the characters and are now showing us how they relate to one another. But considering it only took God seven days to make the world, there is also some serious time and labour involved.

DC’s big reveal at Comic Con, meanwhile, feels like an attempt to speed up this process. After Christopher Nolan’s self-contained Batman trilogy ended in 2012, DC unofficially kick-started its own shared universe with 2013’s Man of Steel, directed by Zack Snyder. While it exists apart from Nolan’s trilogy, Snyder’s Superman piggybacks on its darker tone. This, it announces, is to be DC’s visual and thematic palette moving forward. While Marvel has been content with a lighter touch, DC wants to be epic and operatic. It’s painfully easy to find fault with this direction, especially given Superman’s status as the original primary colour superhero. But what’s been shown of Batman v. Superman: Dawn of Justice and Suicide Squad so far gets at a larger problem.

Both trailers are, in a word, overwhelming. For Dawn, we see images of Henry Cavill’s return as Superman, Ben Affleck’s new Batman, Jesse Eisenberg’s Lex Luthor, General Zod’s corpse, Robin’s graffiti-ed costume, and, deep breath, Gal Gadot as Wonder Woman. This feels like a lot for two and a half hours. The role call for Suicide Squad—featuring Will Smith and actual operatics—is even longer.

Now, some of these glimpsed moments, taken in isolation, are quite powerful. Dawn of Justice promises a stand-off between two of the most iconic fictional characters of all time. It also appears, not incidentally, to use some of Frank Miller’s famous The Dark Knight Returns as a visual touchstone. It’s a smart play, even if we’re left to wonder how, for example, Wonder Woman fits in. This is where DC’s decisions start to feel creaky. While Marvel stokes anticipation in-film, DC makes rather large assumptions outside of it. For Wonder Woman’s presence to make sense in Dawn, it will require some pre-existing knowledge of the character. She’s decidedly not the focal point of the film—it says so right in the title. Her importance is inferred only by the knowledge of a standalone Wonder Woman film planned for 2017. A follow-up Justice League movie—uniting the trio of Batman, Superman and Wonder Woman—is then supposed to ignite the expansion of DC’s shared universe into which the rest of its roster of characters will appear. It’s bold, but also backward.

Since movie trailers are all tease, DC’s plan looks sound on the surface. The trailers imply a unified galaxy of worlds filled with a multitude of stars set for their own solo adventures. Dawn of Justice features the company’s three biggest characters, while Suicide Squad looks to build, in one quick flurry, an entire constellation of villains. DC has it all scheduled out after that. It’s quite a feat, considering the quick turnaround time. But through all that noise, it disregards the necessary emotional under-girding inherent to proper comic book storytelling. Who are these superheroes and villains? Why are they fighting? And why should we care about, say, Aquaman in 2017 when his story will only be told in full in 2018? In their race to compete with Marvel, DC has disregarded those aforementioned universal tenets. Now the gigantic scope makes sense—these films are designed to be too big to fail.

The Avengers getting interrupted by the demands of narrative.

To fight against the franchising of Hollywood now is a losing battle. And while it feels strange to commend one corporate behemoth over another, this is the film universe we live in. To its credit, Marvel’s grand design does not prevent their individual films from standing on their own. They breathe in places and even leave room for a laugh or two. The most memorable sequence of the latest Avengers movie, Age of Ultron, is not the climactic robot battle but rather when the gang just hangs out. Here the audience’s investment in these fictional characters pays off. We know who these people are. The film leverages that well-earned familiarity, and its cast of charismatic actors, into a moment of cinematic pleasure. Everyone has fun.

That we get lashed to an expository rocket ship afterwards is besides the point—in DC’s new universe, all we’ll be getting is the ride. It may provide for a bigger bang, but it could also blow up in somebody’s face.

142 responses to “Marvel vs. DC: Whose Universe is it Anyway?”